What are LSI keywords? They are words that are semantically related to your main keyword. Search engine algorithms use them to understand context.

LSI keywords can improve your SEO by helping search engines to understand what your content is about. They also help your page rank for related keywords. 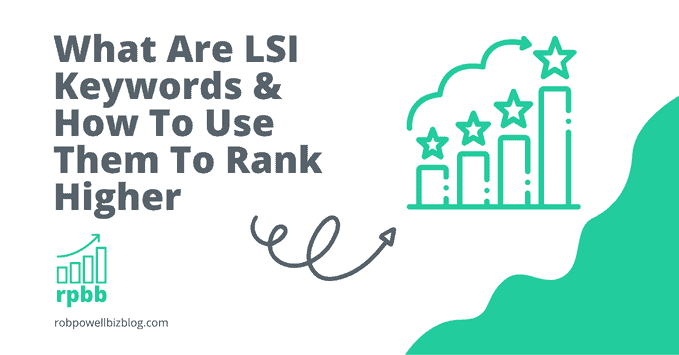 What Are LSI Keywords?

And that's why LSI keywords are important in SEO.

What Is Latent Semantic Indexing?

Latent semantic indexing (LSI) is a mathematical technique that detects the way words cluster together in predictable patterns. Search engines use these patterns to understand context.

An example of how latent semantic indexing works is where the same word has two or more different meanings.

For example, the word 'apple' could refer to the fruit or the computer.

When the word 'apple' is found with words like 'iTunes', 'iOS', and 'Mac', an algorithm would know that this is 'apple' as in computers.

But where the word 'apple' clusters together with words like 'pear', 'orange', and 'green', the same algorithm would know that this is 'apple' in the sense of fruit.

Here's an example of latent semantic indexing in action.

If you type 'best dates' into Google, you'll see a mixture of results: 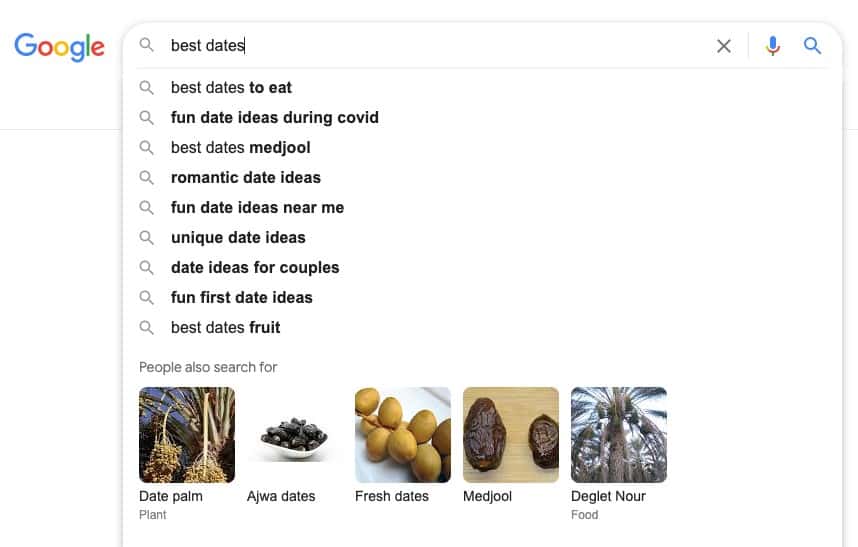 Some of the suggestions relate to 'dates' the fruit and some relate to 'romantic' dates. That's because 'best dates' doesn't give the algorithm enough information.

But if you type in 'best tasting dates', the suggestions all relate to dates the fruit:

That's because the algorithm knows that when the word 'dates' is found with the word 'tasting', it refers to 'dates' the fruit.

But if you type in the words 'most memorable dates', the suggestions all relate to 'romantic dates':

That's because the algorithm knows that when the word 'dates' is found with the word 'memorable', it refers to the activity of 'dating'.

So latent semantic indexing looks at the context in which words are used to understand what those words mean.

It's often said that LSI keywords are synonyms.

But this is not entirely accurate.

Why Do Search Engines Use LSI Keywords?

Back in 1998, the only measure Google had for relevancy of a page to a given search term was keyword density.

But keyword density was easily manipulated through the practice of keyword stuffing.

So Google moved away from keyword density and began looking at LSI keywords.

The reasoning was this:

A legitimate page about ‘Apple computers’ will likely contain a lot of other words and phrases that are related to Apple computers (such as 'apple stores', 'apple iphone 5', 'apple new ipad', 'apple stock price', 'discount computers').

On the other hand, a keyword-stuffed page about ‘Apple computers’ will probably just contain that one keyword, repeated over and again.

So latent semantic keywords provide Google with a way to differentiate between content that deals with a topic in depth, and content that has been optimized for the search engines by keyword stuffing.

And that allows search engines to improve the match between what people search for and the content they find in the search results.

Here are three ways you can use latent semantic keywords to improve your SEO:

Google now looks at total context rather than keyword density. LSI words will give more context to your article. This means your page will rank higher for your focus keyword because Google better understands the context of your page.

You reached your limit for keyword density

Let’s say you want to add more keywords in your content but you’ve reached the limit for recommended keyword density – anymore repetitions of your keyword and you risk a Google penalty.

Get found for keyword variations

Semantically related keywords are closely related to your focus keyword - they're 'keyword variations'.

That means your page is going to come up in the search results for related searches. In other words: more chances of your content being found by people searching on that broad topic.

Where To Use LSI Keywords

Here are some of the places you should use LSI keywords in your article:

Use Google To Find LSI Keywords

The best place to find latent semantic keywords is in Google itself. Here are three places in Google Search where you can look for LSI keywords:

Just type in your main keyword into Google and look for LSI keywords in the SERP snippets.

Let's say you're writing an article about 'tendonitis'. Here are some LSI words for 'tendonitis' that you can see in the SERP snippets: 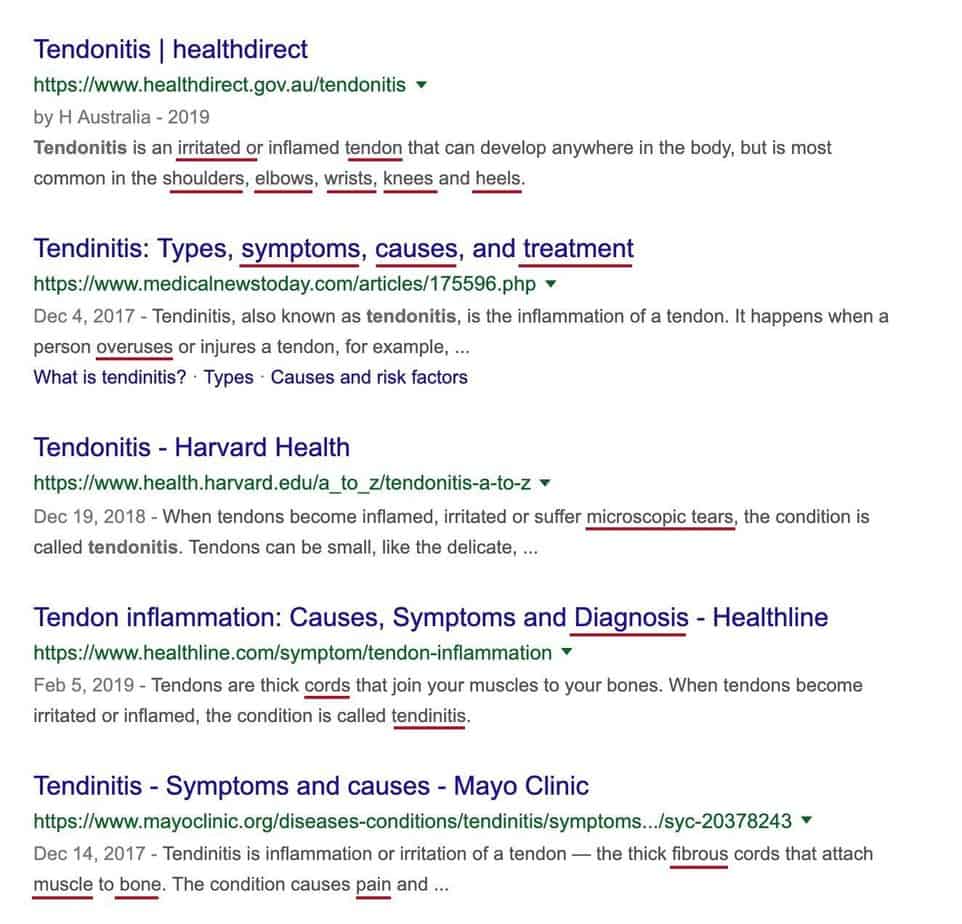 These 19 words I found in the SERP snippets for 'tendonitis' are all LSI keywords because they share the same context as the 'tendonitis':

As soon as you start typing a search term into Google, Google Auto Suggest comes up with related words and phrases that people also search for.

These also contain semantically related keywords and they're great for search engine optimization. Add them as keywords in your content and you will increase the topical relevance of your article or blog post.

Here are the Google Auto Suggest terms for 'tendonitis':

In this instance, I already have these words from the previous exercise. But what if I click on 'tendonitis wrist':

That gives me some additional LSI words. You can keep drilling down through the Auto Suggest entries and find more and more latent semantic keywords.

A third way to find latent semantic indexing words in Google Search is to look at 'Searches Related To' at the foot of the SERPs page:

There are also a number of keyword research tools dedicated to finding semantically related keywords.

LSIGraph is a free tool for generating LSI keywords.

Then scroll through the results for more LSI keywords: 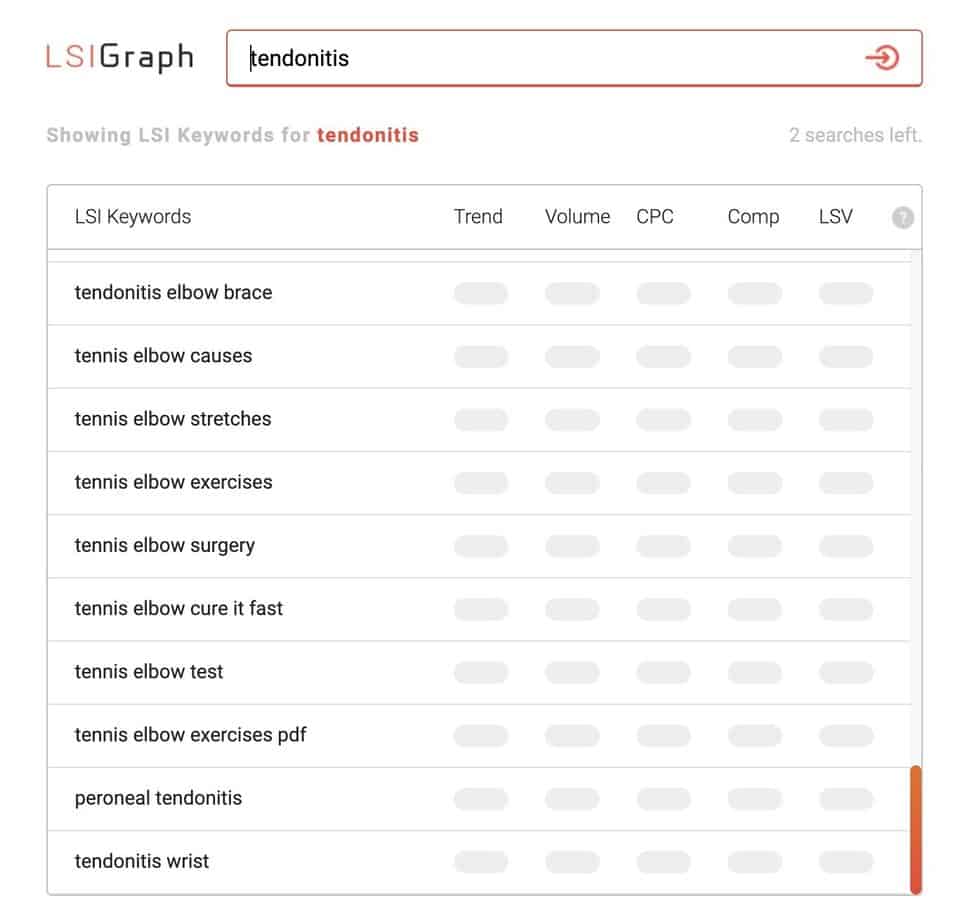 As with the previous tool, just enter your seed word and hit 'search'. This tool returns a massive list of over 1,800 keywords related to 'tendonitis'': 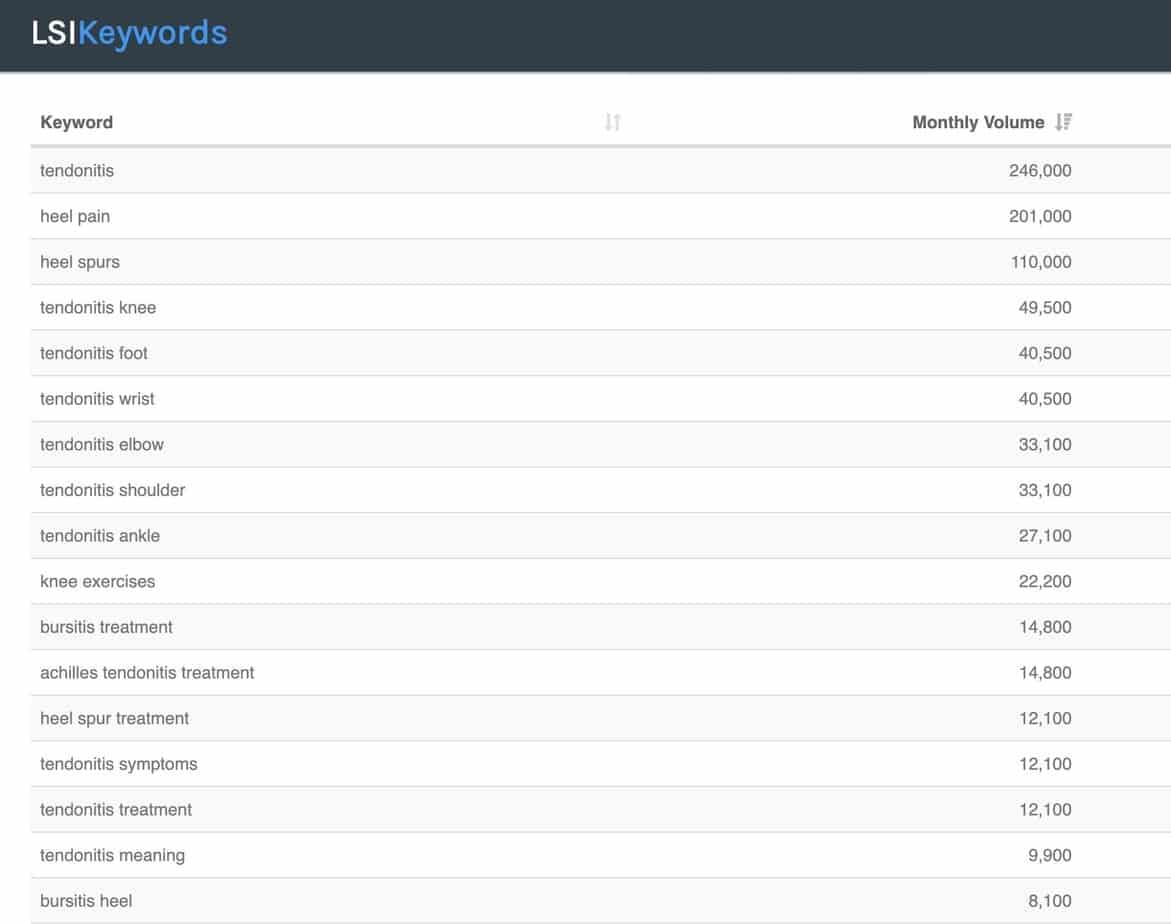 This is another great tool for finding latent semantic indexing words. In my case, it gives me over 300 of them: 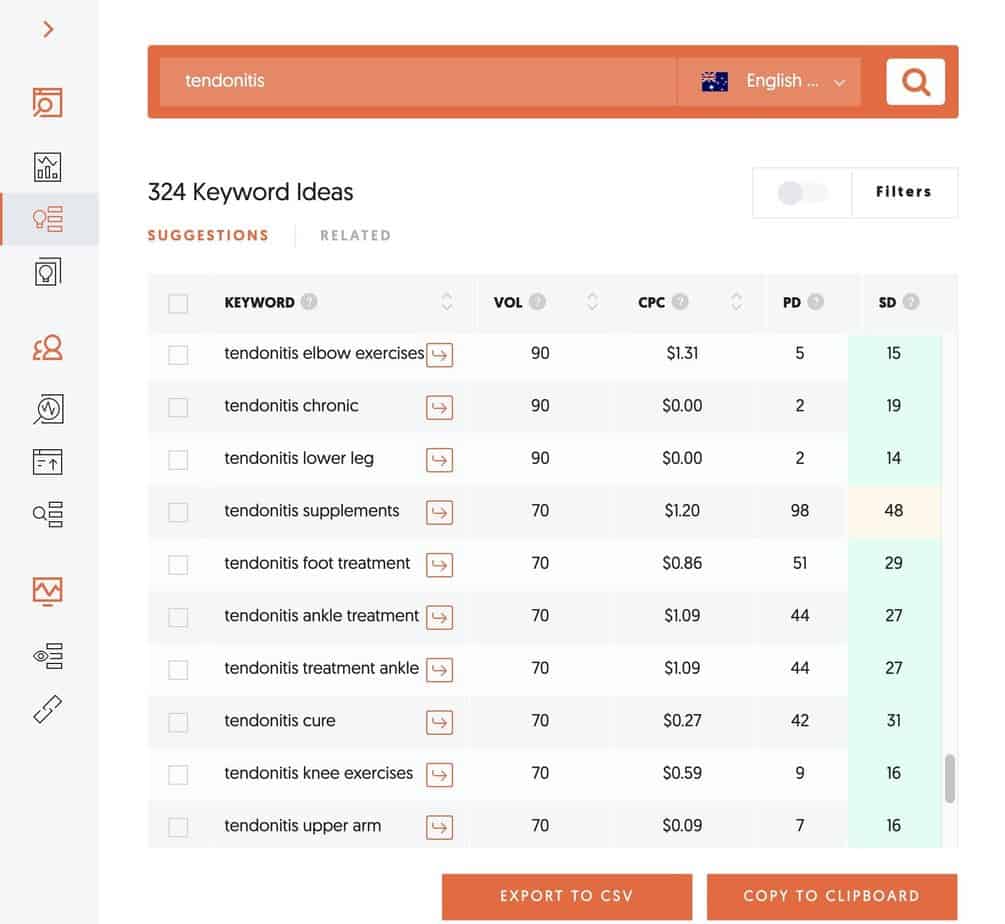 How To Add LSI Keywords to Your Blog Post

Adding latent semantic indexing words to your article isn't always easy, especially if you have to re-write parts of your article to fit the new words in.

But here are two super-easy ways to add LSI words to your blog post without having to re-write anything:

Under each section of your article, add a 'Further Reading' panel that lists three to five articles related to the topic of that section.

These articles will inevitably contain LSI keywords in their titles. And those words will improve the topical authority of your article.

Let's say you have an article on 'Cures for Tendonitis'. You could add a 'Further Reading' panel at the end of that section, like this:

If you've written other articles on the same general topic, you can link to them in a 'Related Articles' panel. The titles of these articles will almost certainly contain latent semantic indexing words.

Here's a checklist to help you quickly optimize any blog post for semantically related keywords:

Look for bolded words in the Google search results: these are LSI keywords that you can add to your content to increase your topical authority.

Scan the keywords that appear in Google’s Auto Suggest feature. These are also LSI keywords:

Scroll down to the foot of the Google search results and look at Google’s ‘Searches Related To’. These are LSI keywords that you can use to expand your article or blog post:

Include LSI keywords in your SEO Title

Your main keyword should be at the beginning of your SEO title, but you can also include an LSI keyword in your title:

Use your primary keyword and LSI keywords in the description tag of your SERP snippet:

Include LSI Keywords in your headings and subheadings: 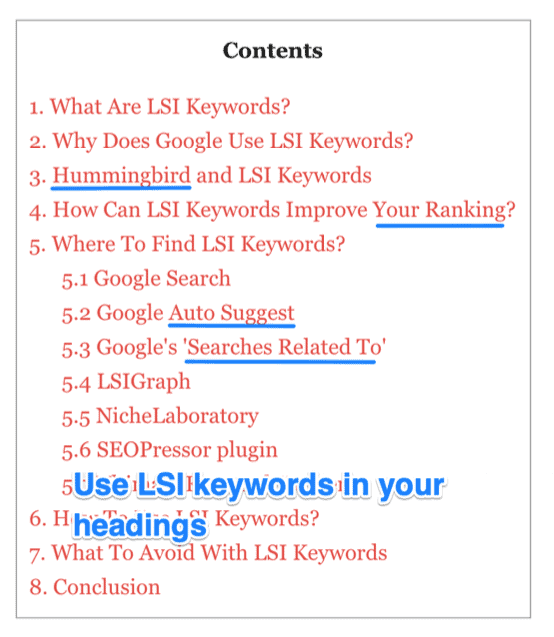 Latent semantic keywords are a vital part of how search engines understand and rank content. That's why it's important to be aware of them as you optimize your blog posts for SEO.

By finding semantically related keywords, you'll get a better grasp of the scope of your topic. You'll also be able to add sub-topics to your content and that will increase the topical authority of your articles and help them to rank higher in the search results.

Not only that, but adding LSI keywords to your content will allow your content to be found in related searches and that will further increase your traffic.