If you can somehow link your content to these stories, you can get levels of exposure for your blog post you could normally only dream of.

And the best part?

That exposure can lead to dozens of backlinks from high authority news sites.

table of contents
What Is Newsjacking?
Speed is the Key to Newsjacking
Getting Your Article Found By Journalists
Newsjacking Blog Posts - Examples
Newsjacking on Social Media
When Newsjacking Goes Wrong
Four Kinds of Newsjacking
How To Newsjack with a Blog Post
Conclusion
More Articles About Blogging

David Meerman Scott coined the term in his 2011 book titled, ‘Newsjacking: How to Inject your Ideas into a Breaking News Story and Generate Tons of Media Coverage’.

The word is a combination of ‘news’ and ‘jacking’. Although it has connotations of ‘high jacking’, its actually more like piggybacking or ‘hitching a free ride’.

When a story goes viral there’s often a deficit of information surrounding that story. Journalists are desperate for anything that they can use to fill out their stories.

Very often, all they have is the bare bones of the story - they need context, statistics, and any other background information they can get in order to flesh out their story.

If you can assemble all the available information on that breaking story in one place, there’s a very good chance that journalists rushing to meet a deadline will cite your web page and link to it in their stories.

Speed is the Key to Newsjacking

The key to newsjacking is speed.

You have to act very fast.

As the diagram below shows, the stories themselves have very short lifespans.

But the window of opportunity when journalists are scrambling for information is even smaller: 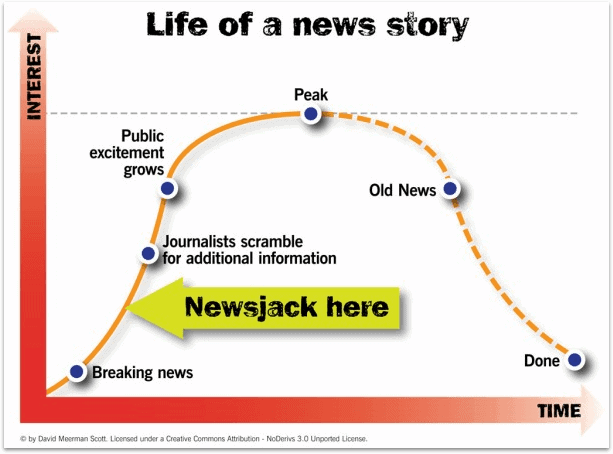 And in order to catch a breaking story early in its cycle, you need to be monitoring the news.

One way to do this is set up Google Alerts for the topics that are related to your business.

For example, if you’re in the SEO space, any breaking news about a Google algorithm is something you could newsjack.

If you’re a social media expert, any breaking story about a Facebook update would be a good newsjacking opportunity

Another way to be ahead of the curve is to sign up for RSS feeds from sites in your industry.

Once you see a breaking story that's a good candidate for newsjacking, you need to quickly assemble all the basic facts about it.

Then add as much expert opinion and analysis as you can around those basic facts.

That’s what journalists will be looking for: anything that they can use to contextualize the story.

But how do you get your blog post in front of journalists?

Getting Your Article Found By Journalists

Journalists scrambling for more information on a breaking story will be searching in Google.

So you need to combine your newsjacking technique with some long tail keyword research.

Find a long tail keyword with sufficiently low competition that you can quickly get on Page #1 of the search results for that search query.

In my experience it takes Google anywhere from a few hours to a few days to index a new blog post.

Use the ‘fetch as Google’ tool in Google Search Console to speed up the process.

Using this method, I’ve had new blog posts indexed and ranked on Page #1 of the SERPS within an hour.

He saw a news alert about Google’s ‘Interstitial / Pop Up Penalty’.

Within a few hours he had a post published titled: “The Google Pop-Up (Interstitial) Penalty explained”.

And it earned him some nice backlinks from news sites with high domain authority.

Michael Reynolds of Spinweb newsjacked the announcement of Facebook’s new Messenger App, with a blog post titled: Creeped Out by Facebook's New Messenger App? Use the Mobile Web!

Of course, newsjacking is not limited to blog posts.

In fact, due to the speed required, most newsjacking occurs on social media and consists of less than 100 words.

When a decision was handed down later that year, MichelinUSA Newsjacked the story with this tweet: 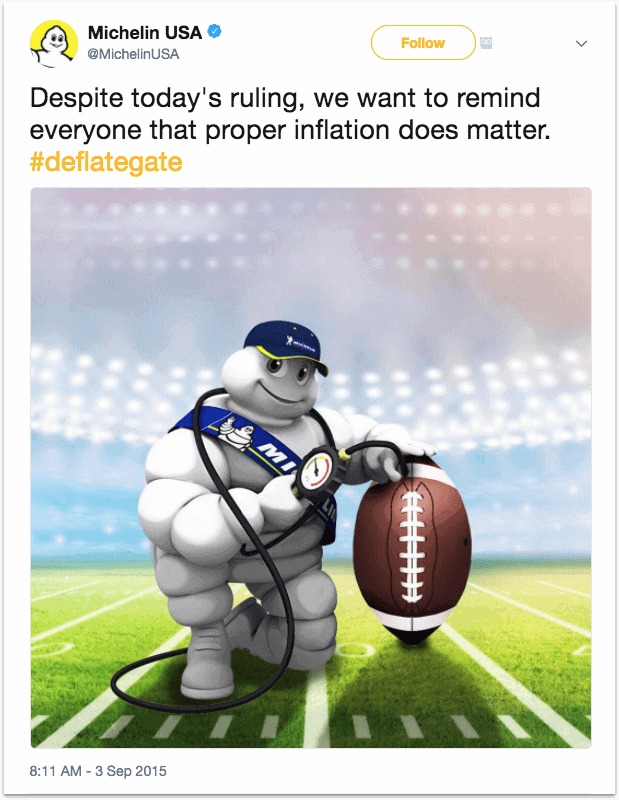 When the tabloids published photos of a naked Prince Harry in Las Vegas, Unilever (owners of the Lynx deodorant brand) newsjacked the story with this ad in US newspapers: 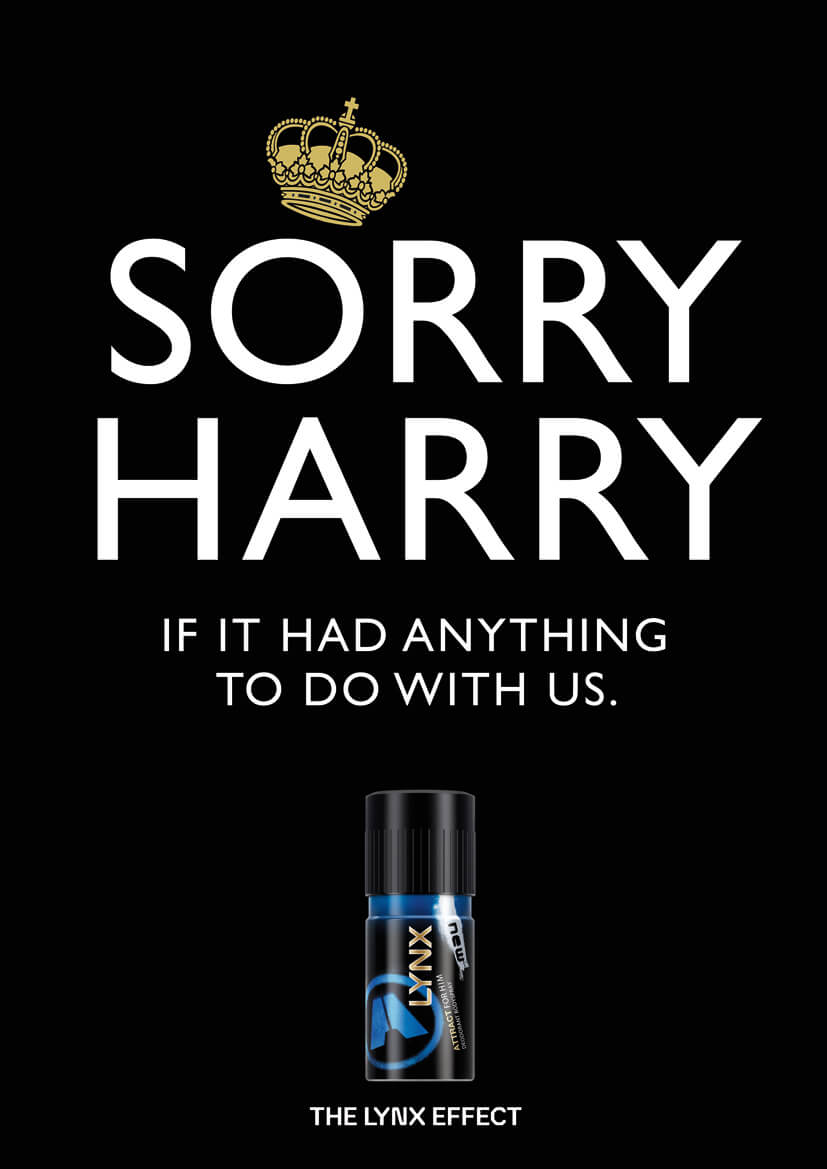 When NBC broadcast ‘The Sound of Music Live!’ on December 5, 2013, DiGiorno newsjacked that event with this tweet:

Remember the blackout at the New Orleans super bowl in February 2013? Tide cleverly hijacked that event with this tweet: 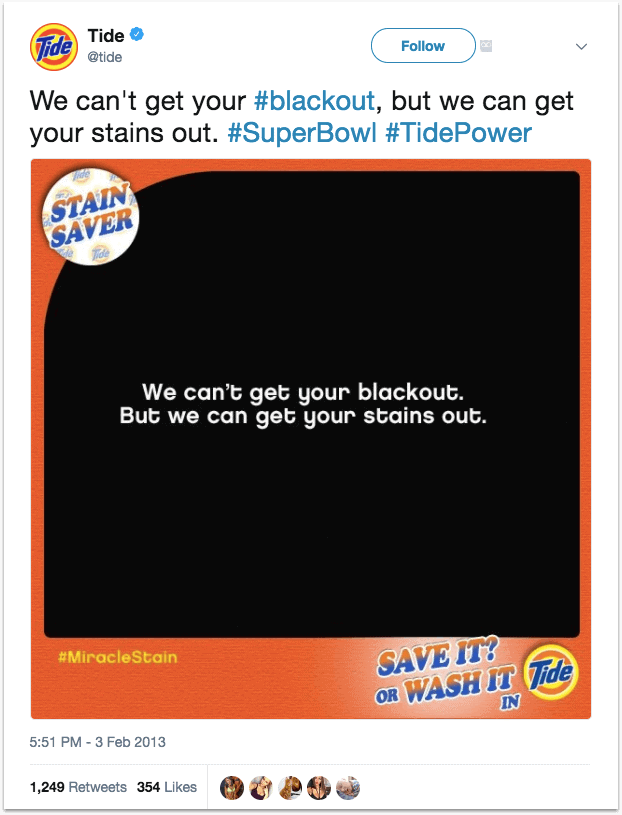 But Oreo’s newsjack of that same event was even more successful, with almost 15K retweets: 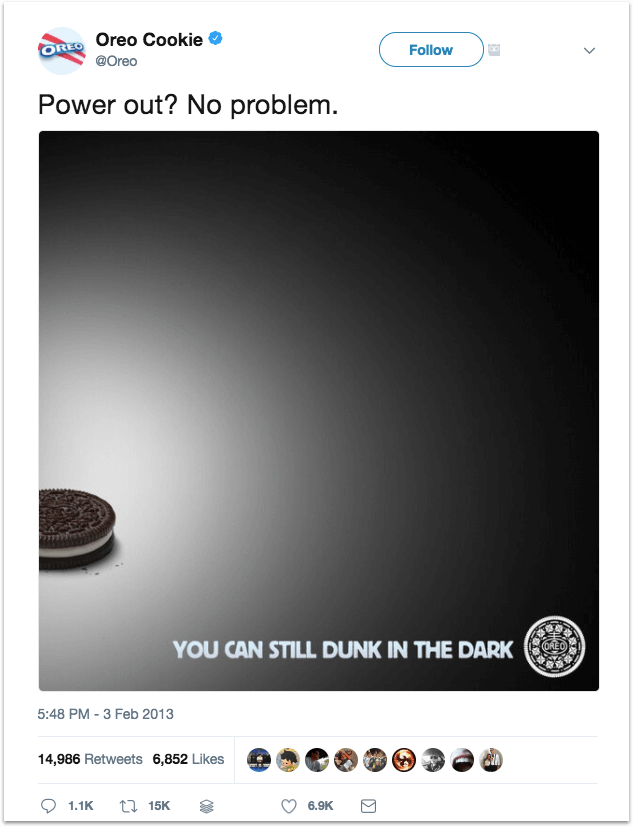 As it happens Oreo had bought a Super Bowl ad of it own, at a cost of up to $4 million per 30 seconds.

But they almost certainly got more exposure from the newsjack tweet than they did from the paid advertising.

But newsjacking can also go wrong.

Always think twice before trying to associate your brand or your content with a breaking news story that is negative.

Here are some examples of brands that tried to newsjack negative stories, only to have it backfire:

In February 2011, amidst a wave of protests that was shaking Egypt to it foundations, shoe designer Kenneth Cole posted the following tweet: 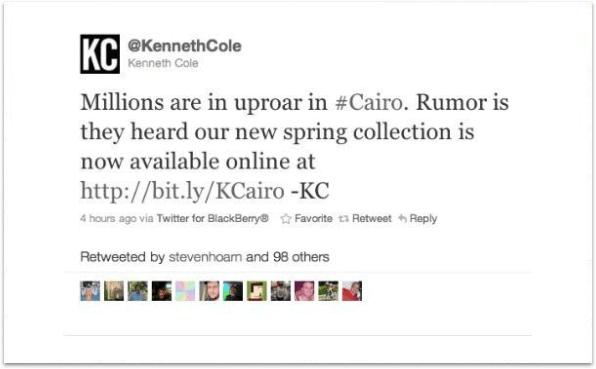 Amidst a public outcry, he deleted the offending tweet and posted an apology: 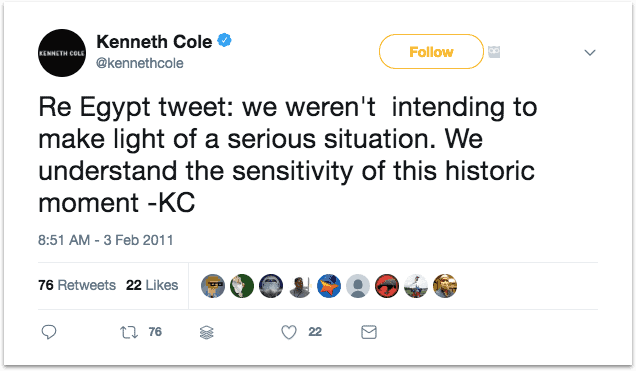 But it seems he didn’t learn his lesson (either that or the publicity really worked for him).

Because two years later, he newsjacked the Syria conflict: 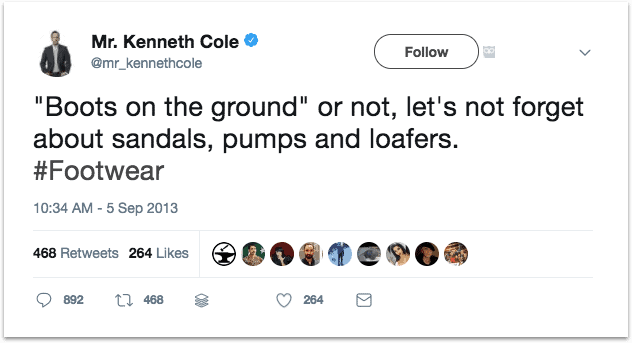 “Boots on the ground” was a reference to a phrase used by President Obama in explaining why he wasn’t committing ground troops to the Syrian conflict.

Sears made the same blunder when it attempted to piggyback its brand on the misfortunes of Hurricane Sandy: 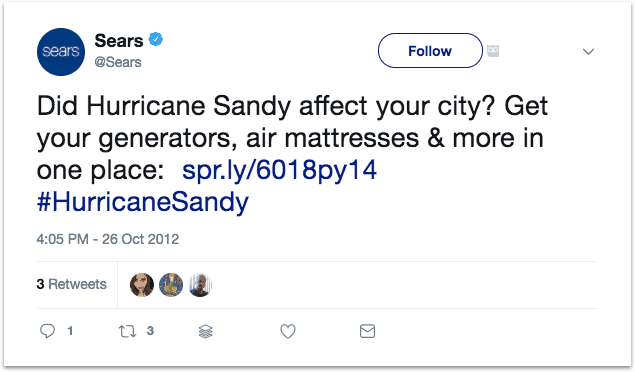 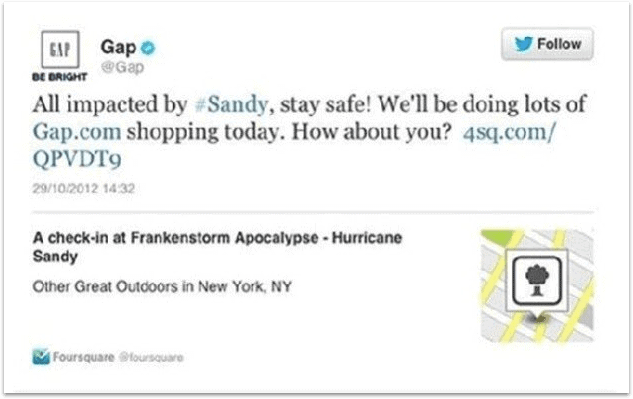 …and later tried to cover their tracks: 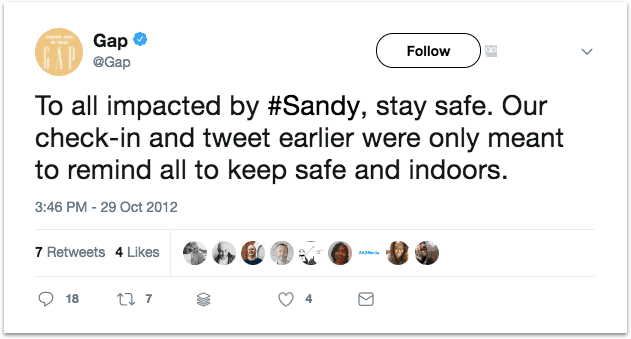 It’s one thing to newsjack a story that involves other people’s suffering.

But newsjacking a story by trivialising something held sacred by the American public is another thing altogether.

And that’s what Golf Channel did with this tweet:

It was mocked mercilessly on social media: 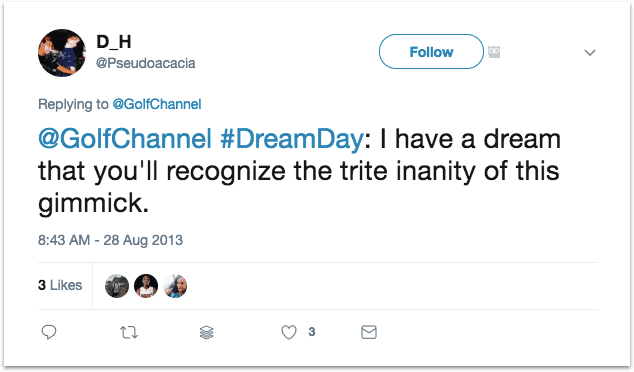 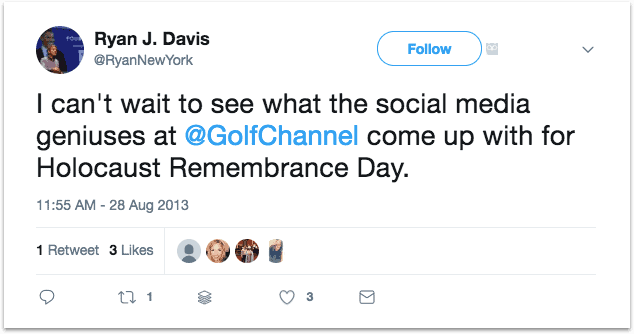 Golf Channel eventually deleted the tweet and issued an apology: 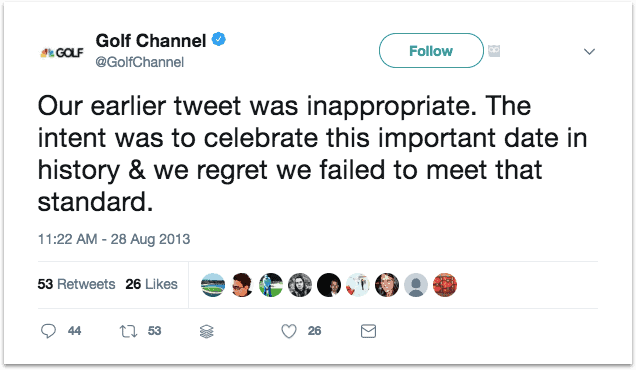 AT&T committed the same gaffe when they tweeted an image of a smartphone taking a photo of the ‘Tribute In Light’, with the caption “Never Forget”: 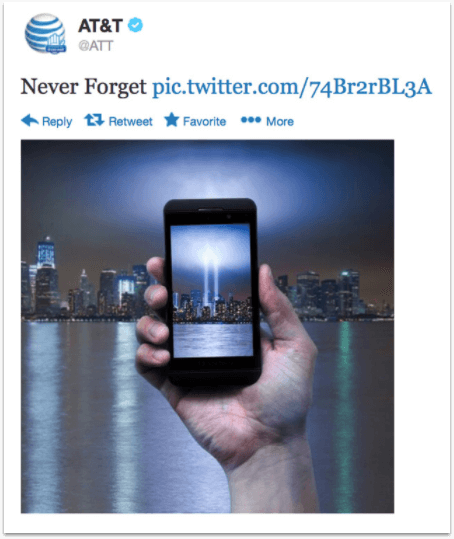 The reaction was swift and negative.

AT&T removed the tweet an hour later and issued an unreserved apology.

Here are some rules to consider when deciding whether or not to newsjack a story:

The difference between these four approaches comes down to time.

Broadly speaking, the more time that has elapsed since the story broke, the more of your own opinions and analysis you should inject into the story.

The choice between going early and going late is a trade-off between the kudos of being first on the ground and the value that you can inject into the story by providing more detailed context and greater depth of analysis.

Regardless of which of Hubspot’s newsjacking formats you go for, here are the basic steps for newsjacking with a blog post:

To newsjack effectively you have to be watching the news cycle like a hawk.

Identify a handful of key topics that relate to your business or blog. Then set up Google Alerts for those topics.

Once you identify a breaking news story, you need to decide whether to newsjack it or not.

Write your blog post using one of the four newsjacking formats identified by Hubspot.

You want your article to be found by journalists using Google search, so do your keyword research (as you would for any other blog post) – aim for a long tail keywords that you can rank for on Page #1 of the SERPs.

As soon as your article is live, send it out on Twitter using an established hashtag associated with your breaking news story. Tweet it 7 or 8 times in a 24-hour period, using different wording each time.

Newsjacking can be a very effective technique for getting traffic to your blog post and high authority backlinks from news sites.

But it needs to be practiced with great discretion. As some major brands have discovered to their expense, newsjacking can backfire badly.

Why not add it to your toolkit of blog promotion techniques?