Long tail keywords are keywords containing three or more words. They typically have relatively low search volume but they also have low competition. And that's why they are the best keywords to target if you run a small business and/or have low domain authority.

In this article you'll learn:

Before we go any further let's talk about the long tail.

What is it exactly?

In 2001, journalist Chris Anderson  wrote an article titled ‘The Long Tail'. He  argued that our economy is shifting from a mass market focused on ‘one-size-fits-all’ products to a market dominated by millions of niches.

Anderson coined the term ‘Long Tail’ as a metaphor for the distribution of demand in the new economy.

But with the emergence of Amazon and other online retailers, shelf-space was a thing of the past.

It was a game changer. Infinite storage meant infinite supply.

And that’s what the theory of the long tail predicts:

That when supply is not constrained by distribution and storage factors, demand shifts away from the ‘head’ towards the ‘tail’.

And the tail is very long indeed. 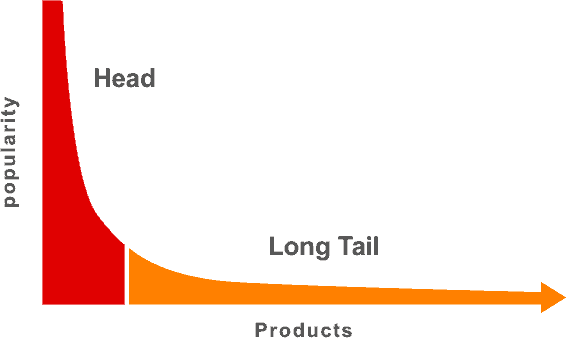 In a nutshell: instead of having a few ‘best-selling’ items, we now have a market that serves millions of individual niches.

Each of those niches might be  a small percentage of the total demand. But the sheer scale of the internet means that it's now profitable to service those niches.

So what does this have to do with keywords?

2. Keywords and The Long Tail

Long tail keywords are niche keywords. And in the search economy, the long tail is where most of the demand is.

So what's the definition of a long tail keyword?

A long tail keyword is a keyword phrase that contains at least three keywords.

And here’s a surprising fact: a whopping 70% of all search terms are long tail keywords.

But that's the trade-off: less traffic in exchange for less competition.

For example, Neil Patel generated over 260,000 organic visitors to his website Quicksprout. And 240,000 of tbose visitors came from long-tail keywords.

3. An Example of a Long Tail Keyword

You might think that 'shoes', or even 'men's shoes' or 'women's shoes', would be good keywords to target.

But the competition to get on page #1 for those keywords is off the charts.

If your website is new and you don't have a lot of high quality backlinks, the you don't stand a chance.

But what about ‘men's Nike tennis shoes’?

That’s an example of a long tail keyword. And you've got a much better chance of ranking quickly for that keyword than for a shorter, more generic keywords.

4. How To Use Long Tail Keywords

Here's an example of how to use long tail keywords.

Not long ago I was doing PPC keyword research for a travel site selling tours to the Great Barrier Reef.

The keyword we wanted was ‘Cairns snorkeling tours’. But it was very competitive and the minimum bid price was too high for our budget.

So we started looking at long tail keywords. Pretty soon we came up with ‘cairns snorkeling tours for non swimmers’ and ‘cairns glass bottom boat tours’.

The demand for these keywords was nothing like the demand for ‘Cairns snorkeling tours’ but the bid price was much lower and well within our budget.

The more specific a keyword is the more the searcher knows what they are looking for.

The buyer intent in the long tail keyword is much stronger than in the general keyword. 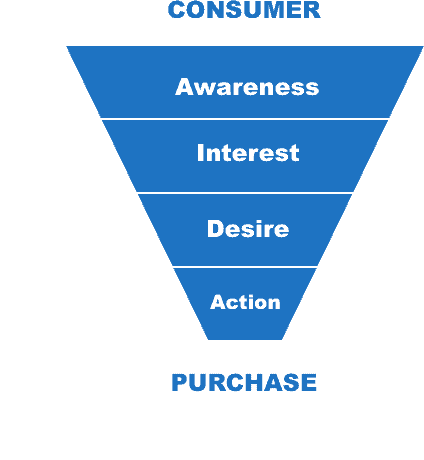 And that means that your page going to rank quicker for long tail keywords.

But it also means you'll have a higher conversion rate on that page.

Because your visitors are at the bottom of the funnel - they're much closer to making a purchase.

And here's another interesting thing: because of the higher conversion rate,  you need much less long tail traffic to produce a sale.

5. How To Find Long Tail Keywords

Have you ever noticed that when you start typing in a search query Google comes up with suggestions even before you’ve finished typing? 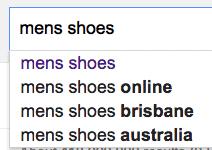 Here’s a neat trick: put a space and an underscore between two of your keywords and Google will insert a suggested term for you.

In the example below, I typed in ‘mens_nike shoes’ and Google came up with four possibilities: 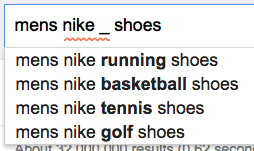 You can use the underscore anywhere you like. Try putting it at the beginning of your search query:

Or at the end: 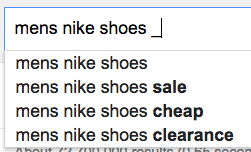 If you want to drill down deeper and get a longer, more specific long tail keyword, click on one of the Google Auto Suggestions. In this instance I'm going to click on 'mens nike shoes sale'.

Place your cursor back in the search box and you'll see that Google has come up with some even longer keywords:

You can keep doing this to get longer and more descriptive keywords.

It’s good to remember that these Google Auto Suggest keywords are not simply hypothetical possibilities - they are keywords that searchers have actually typed into Google.

Another way to use Google Auto Suggest is to type in your root keyword and then start a new word beginning with the letter 'a'.

For example, type in ‘mens tennis shoes a’: 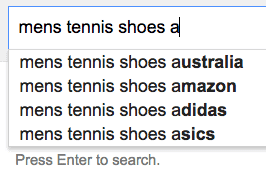 To come up with some great options for long tail keywords, simply go through the alphabet doing this: 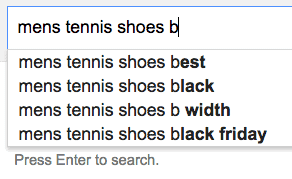 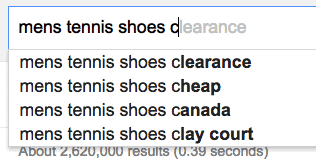 Another tool for finding Long Tail Keywords is the ‘Searches Related To’ box at the foot of the Google Results Page:

I typed in ‘mens nike tennis shoes’ and the Google gave me eight related search terms:

Soovle is an engine that combines the Auto Suggestions of Google, Bing, Amazon, Answers.com, Yahoo, Wikipedia, and YouTube.

It’s a powerful tool for coming up with yet more long tail keywords.

UberSuggest has had a complete overhaul since I first published this article. Although it still has a free version, it' now a full-fledged SEO research tool that has many functions besides keyword research.

The free version is still a powerful tool that will save you masses of time.

Answer The Public is an interesting keyword tool that takes an entirely different approach to keyword research. It's based much more on semantics than other keyword tools.

It combines your root word with prepositions to come up with a huge array of logical possibilities.

For example, if you type in ‘mens shoes’ Answer The Public combines that keyword with the prepositions ‘how’, ‘are’, ‘where’, ‘which’, ‘who’, ‘what’, ‘when’, and ‘why’, and comes up with categories of suggestions based on those prepositions. 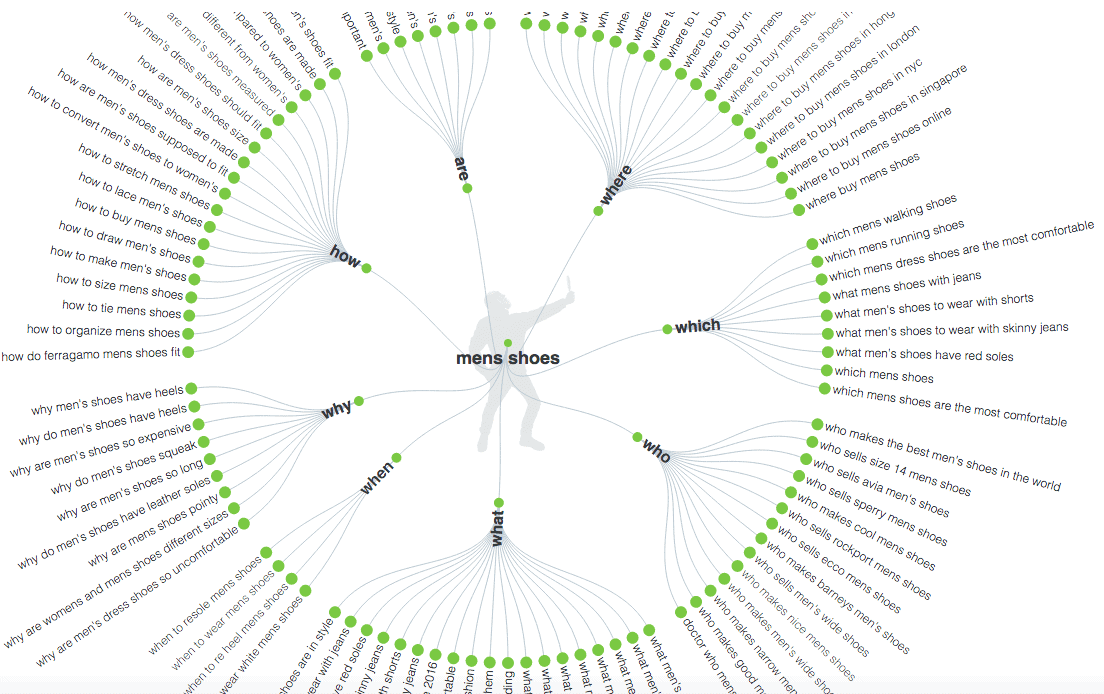 The keyword Scraper Tool in ScrapeBox basically does the same as Uber Suggest but comes back with much longer lists of keywords.

Hit Tail is new on the scene and it's unique in what it does.

It’s the only tool I know of that analyses your own traffic and then provides you with very specific long tail keyword suggestions that are tailored to your audience.

Hit Tail works well on WordPress, and it's easy to use. It basically works in the background, leaving you free to get on with other things.

Long Tail Pro has been around for a while and has a solid reputation as one of the best Long Tail Keyword research tools. This software allows the user to generate hundreds or thousands of unique Long Tail keywords in a matter of minutes based on a single root keyword.

I hope this quick tutorial helps you. The take away? Don't go head-to-head with the big guys for the obvious keywords, especially if you're starting out.

Go for the gems hidden in the long tail that everyone else has ignored. You'll get highly targeted traffic to your site quicker than you thought!

KWFinder is possibly the easiest-to-use keyword research tool. It has a beautiful, intuitive user interface.

See my review of KWFinder

Long-tail keywords offer two huge advantages for bloggers: they are easy to rank for and they have high searcher intent.

The downside of long-tail keywords is that they have much lower monthly search volume than broad keywords.

But that's the trade-off in SEO: low competition in exchange for (relatively) low search volume.