In this article, you'll dicsover: 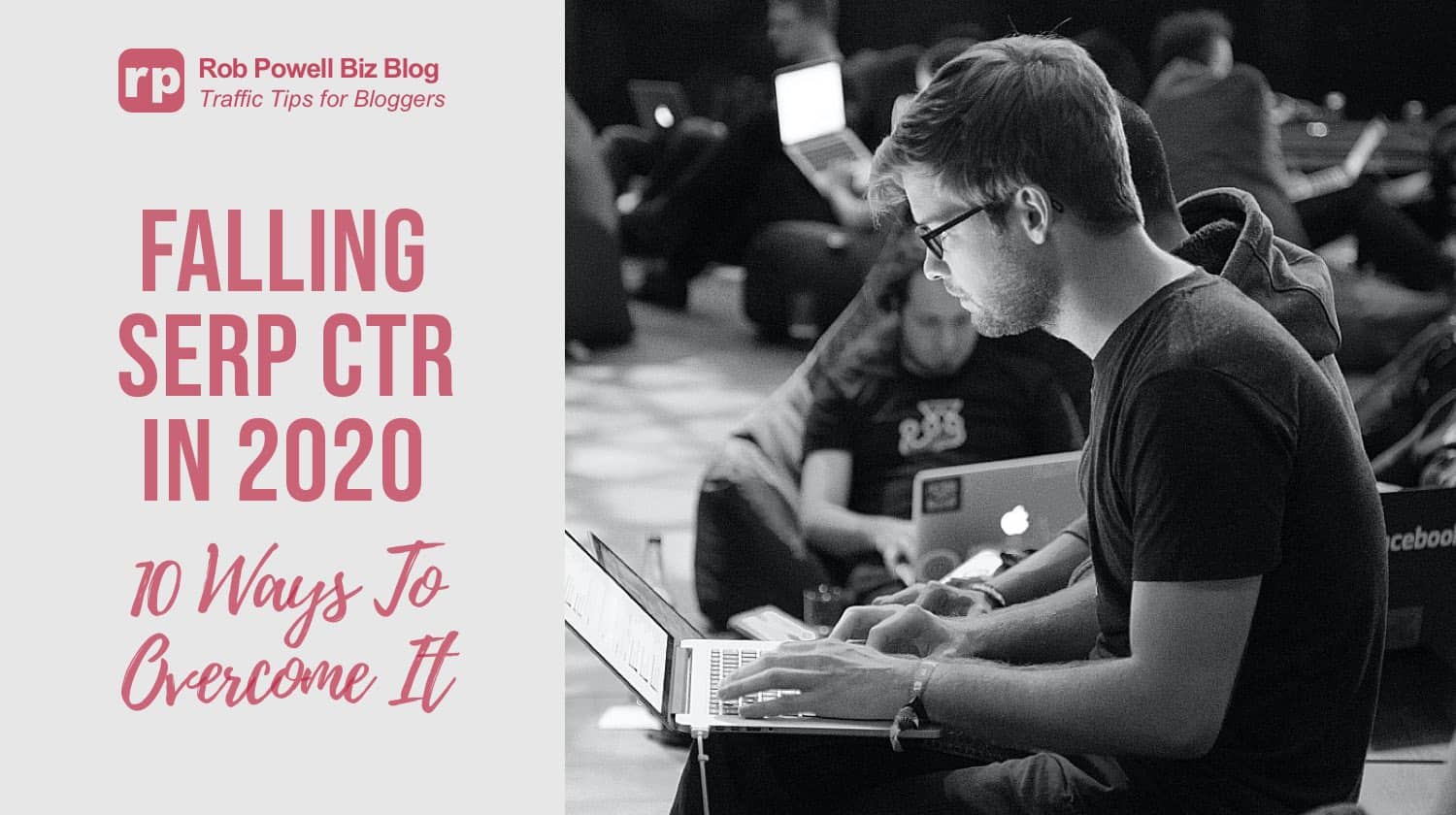 According to a June 2019 article on Search Engine Land, 49% of all searches performed on Google result in no-click. The original research was conducted by Jumpshot and SparkToro. 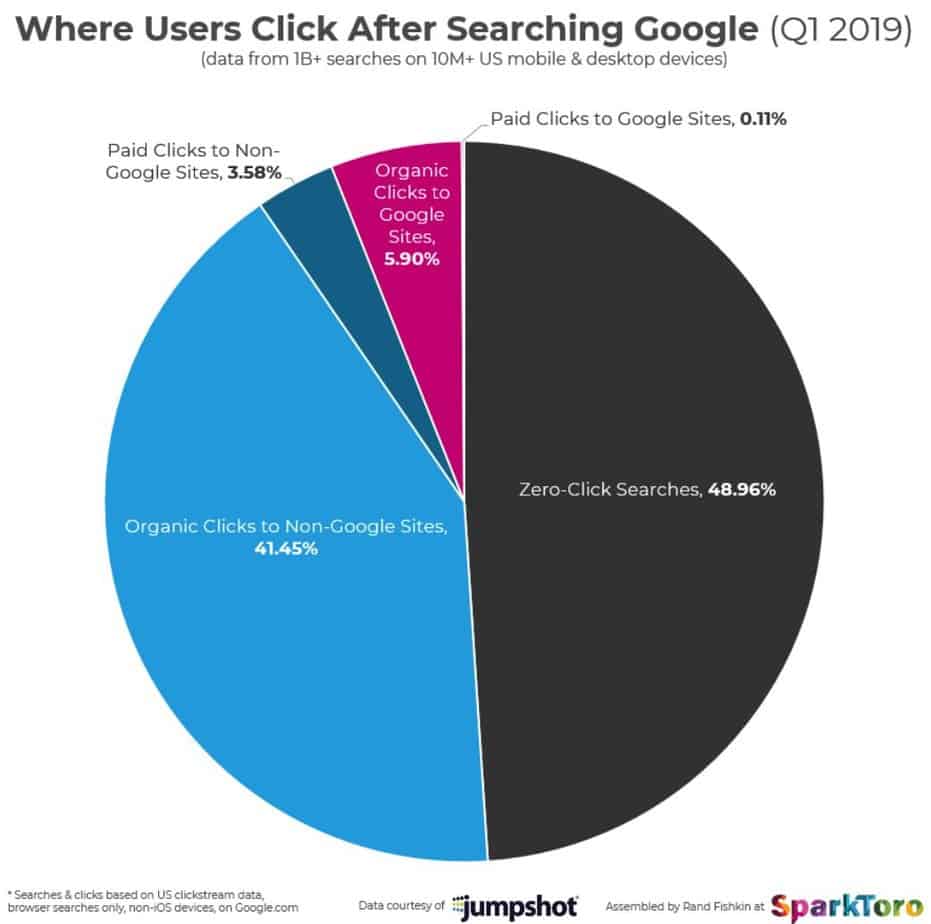 In other words, the searcher found what they were looking for without clicking through to a website.

This is called a no-click (or zero-click) search. It’s a trend that’s been developing for a number of years.

In the first quarter of 2016, the total percentage of zero-click searches on Google was 36.96. That means that zero click searches have increased by over 12% in the last 3 years.

Many of the bloggers I know are seeing their organic CTRs plummeting. People are becoming alarmed.

So what’s causing the sharp decline in click-through rates from search results?

There may be several factors involved, but one cause, in particular, stands out.

The prime suspect in the rapid decline of organic CTR is the Featured Snippet.

Also known as ‘Position Zero’ (because it’s above Position #1), these are snippets that take up four or five times the amount of real estate as a normal SERP snippet.

They aim to give the searcher the answer to their search query without the need to click through to the actual web page. 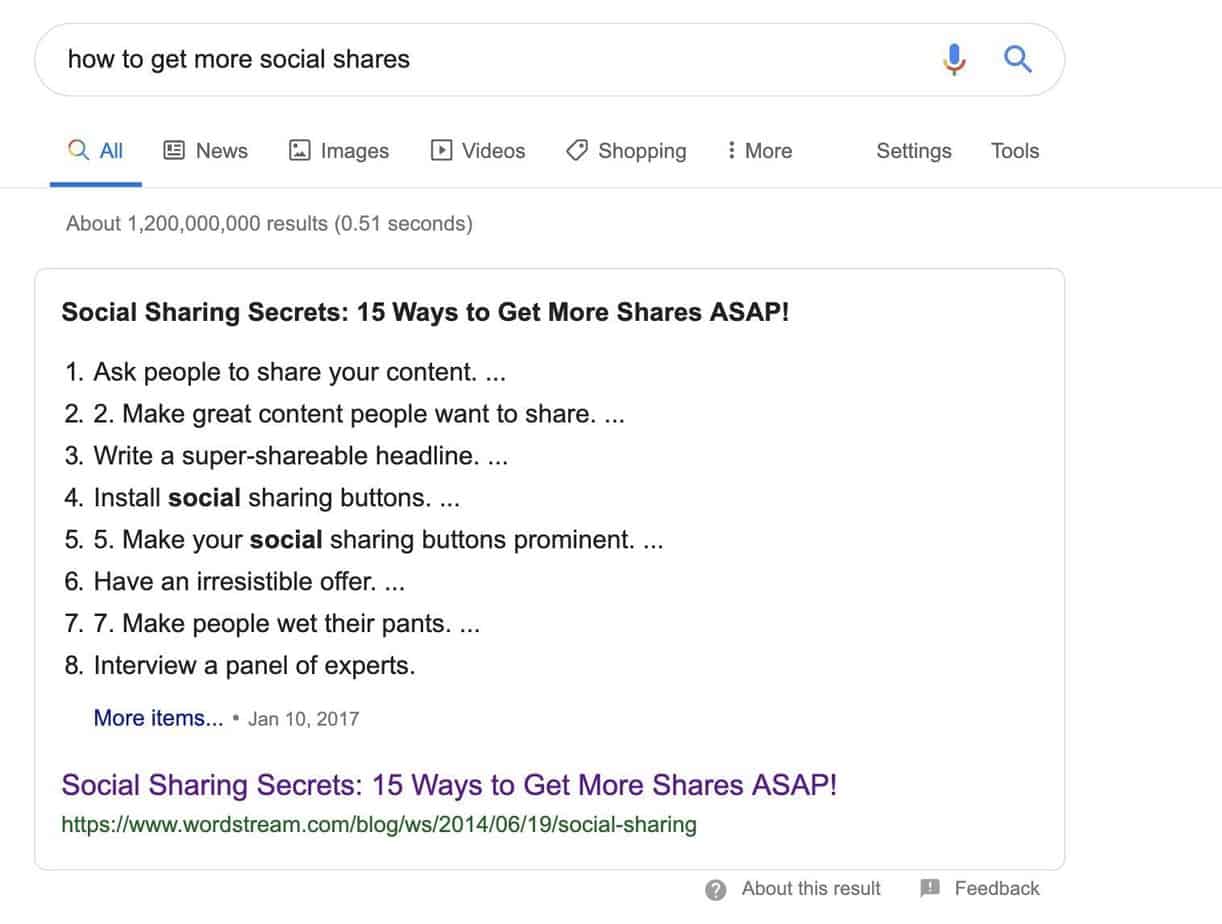 When you click through to the article itself, you can see what Google has done: 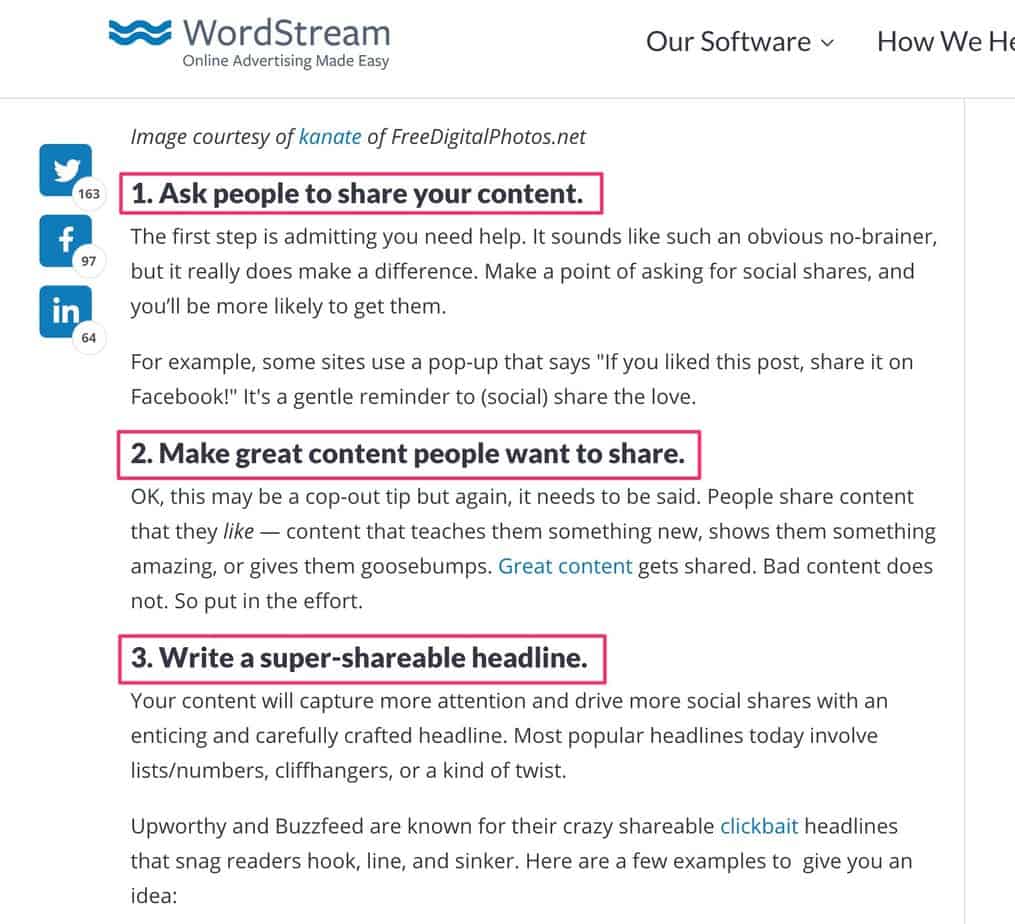 Google has pulled the numbered headings out of the article and presented them in the snippet.

What’s interesting is that Google not only pulls items out of articles to make its own list, it also numbers, or re-numbers, the list.

You can see evidence of this in the featured snippet. Some of the items have double numbering: the author’s original number plus Google’s added numbering: 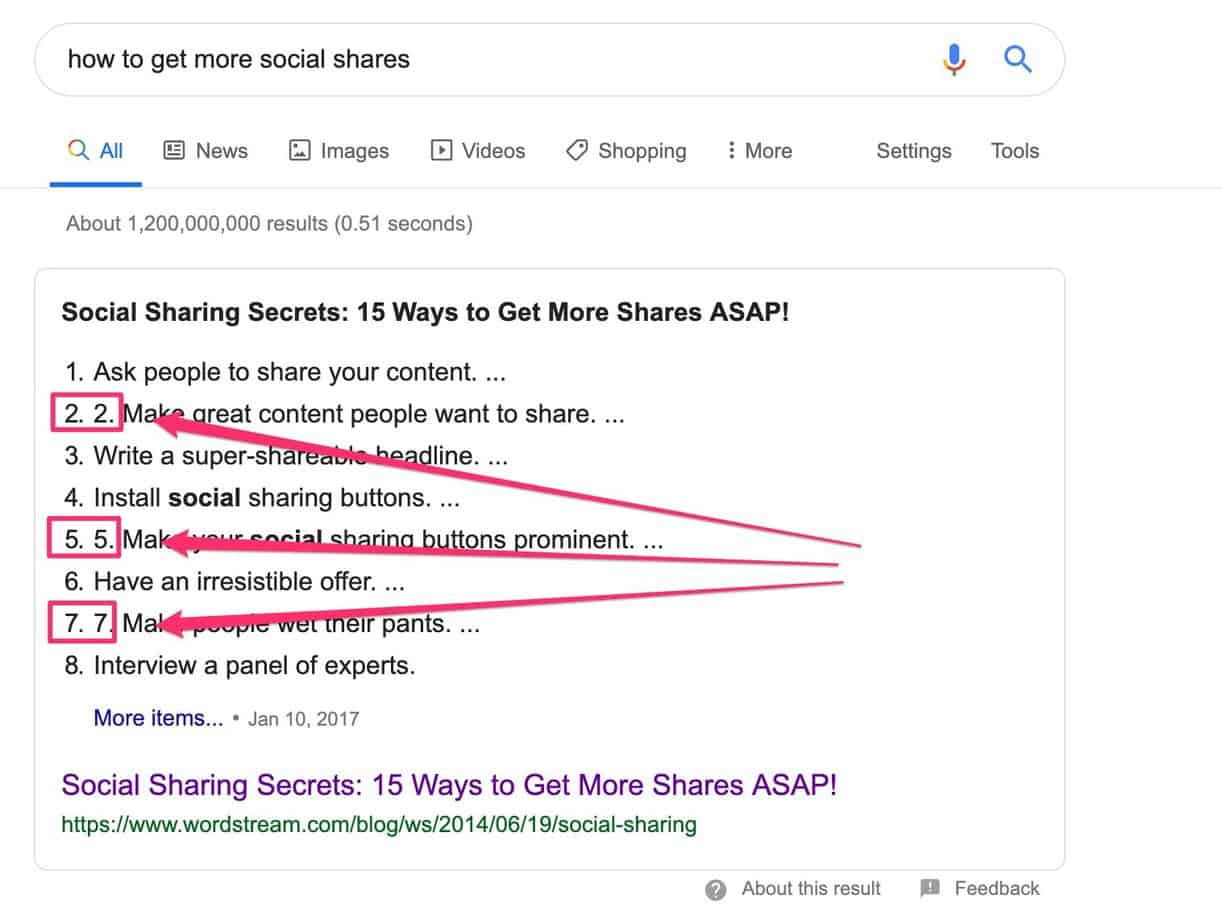 How can featured snippets be responsible for a decline in SERP CTR?

Surely, they result in more clicks, not less – that’s why everyone is trying to get them.

Despite their prominence, featured snippets don’t get as many clicks as you might think (that's the whole reason Google is using them - so that searchers don't have to click away from Google).

Compare this with Position #1. 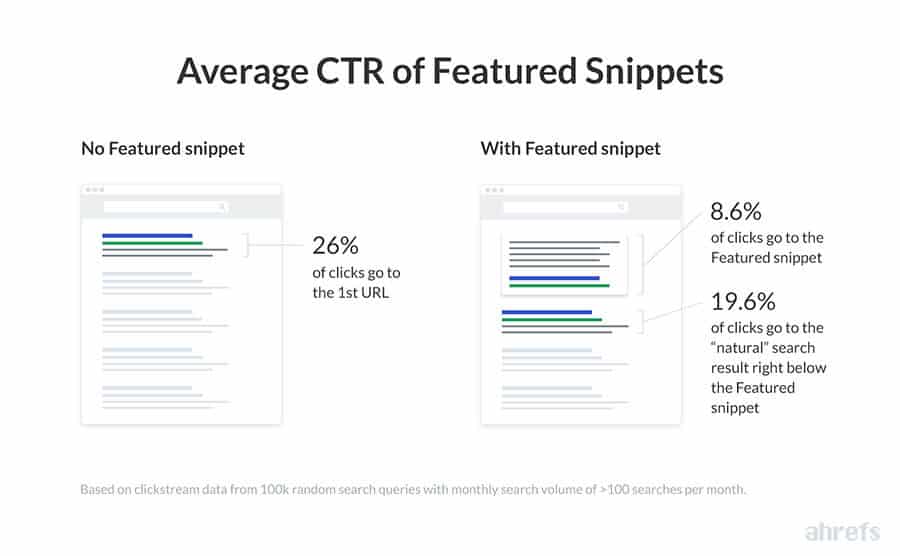 If you’re still in doubt, here’s some research by Path Interactive about the percentage of searchers who find what they want in a featured snippet without clicking through.

Among people aged 13 to 18, a massive 40% get the information they need from the featured snippet without clicking through.

And in the 18 to 30 age bracket, over 20% of those surveyed “read the content in the snippet and consider the question answered without clicking the associated blue link” 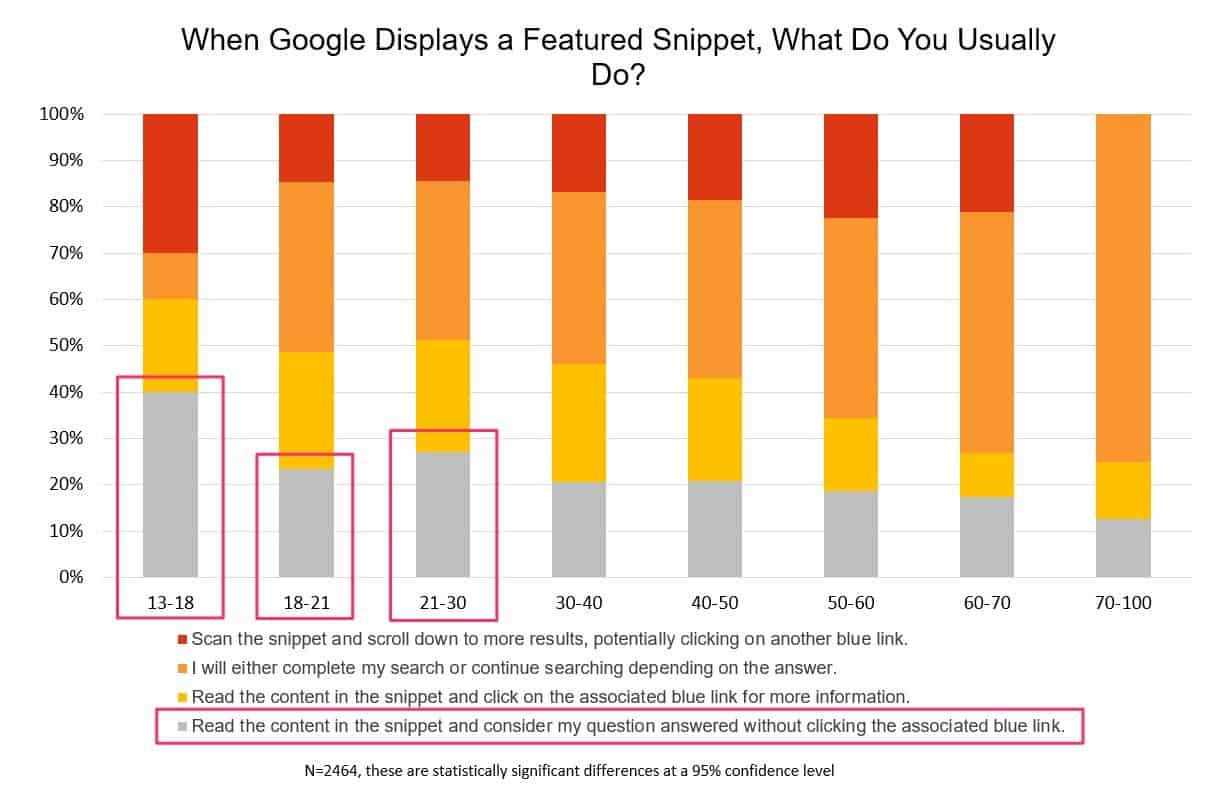 Earlier this month, Michael Stelzner of Social Media Examiner published an article with the title: ‘The Death of Google Search Traffic and What It Means for Marketers’.

So what can you do to keep getting clicks from your SERP snippets, even when featured snippets are sucking the oxygen out of CTR?

There are a few things you can do, but before I get to that, not everyone is evenly affected by the move towards featured snippets and zero-click searches.

For example, if you write an article on how to set up WordPress from start to finish, that’s not a question that can be answered in a featured snippet. That kind of content will be immune from the drive towards no-click search.

But a recipe? A DIY article? An article that lists the best restaurants in Paris? That’s the kind of content that is vulnerable to featured snippets and zero-click search.

So the first thing to do is establish whether your content is going to be affected by featured snippets.

These are the niches that are particularly vulnerable to featured snippets and zero-click search:

Before I get into the details of how to combat the move towards zero-click search, here’s an important point.

Even without the threat of no-click search, it’s always important to watch your SERP CTR and try to improve it.

The reason for this is that Google closely watches CTR. The algorithm assumes that SERP snippets with low CTR are less relevant to that particular search query. And so Google will move low-CTR snippets further down the page.

So CTR is, indirectly, a Google ranking factor. And that means it’s vital to monitor CTR and try to improve it.

It’s actually quite a bit more complex than this.

There’s a strong relationship between organic CTR and where a page ranks in the search results.

Google knows this (of course) and so the search engine has ‘expected CTRs’ for each position in the search results.

In other words, if your site ranks in Position #2 for a given search query, Google will have an ‘expected CTR’ for that position that's different for the expected CTR for Position #7.

It’s pretty clear that any reasonable search engine would use click data on their own results to feed back into ranking to improve the quality of search results. Infrequently clicked results should drop toward the bottom because they’re less relevant, and frequently clicked results bubble toward the top. Building a feedback loop is a fairly obvious step forward in quality for both search and recommendations systems, and a smart search engine would incorporate the data.

How To Increase Your SERP CTR In a Zero-Click World

Here are 10 ways to increase your SERP CTR and protect yourself from zero-click search:

Here are some proven ways to lift the CTR of your SEO titles:

Numbers grab our attention faster than words and make your title stand out from the others. Try to find a way of including 2 or 3 numbers in your title. For example, 5 Powerful Ways To Get 1000 Subscribers in 30 Days.

Here's a list of '700+ Power Words That Will Boost Your Conversions'.

Here’s a list of ‘400+ Words That Trigger Emotional Responses’.

You want your SEO title to produce an action (clicking the title) so use active verbs.

One way to do this is to imagine the searcher thinking “I want to…” and then finish the sentence for them.

SEO titles that have been cut off or truncated are less likely to produce a click because only a portion of your message is visible.

Use the Yoast SEO plugin to ensure your titles are less than 60 characters in length.

Use This Title Formula

This headline formula works in almost every situation:

Make sure to use it in your SEO titles.

As with your SEO title, always include your keyword in the meta description.

Why? Because searchers are scanning the results looking for the search query they just typed into Google.

Include a Call To Action (e.g. “Get Your FREE Copy”) in the meta description. And remember that if you don’t set a meta description, Google will create one for you and (and it won’t be as good as the one you write).

SERP snippets are much more effective when the URL matches the SEO title.

Use descriptive URL’s and not randomly generated URLs.

4. Use Your Brand Name in the Title

To insert your brand name in your SEO titles, use the free Yoast SEO plugin.

Go to SEO > Search Appearance > Title Separator and choose one of the 14 different types of title separators: 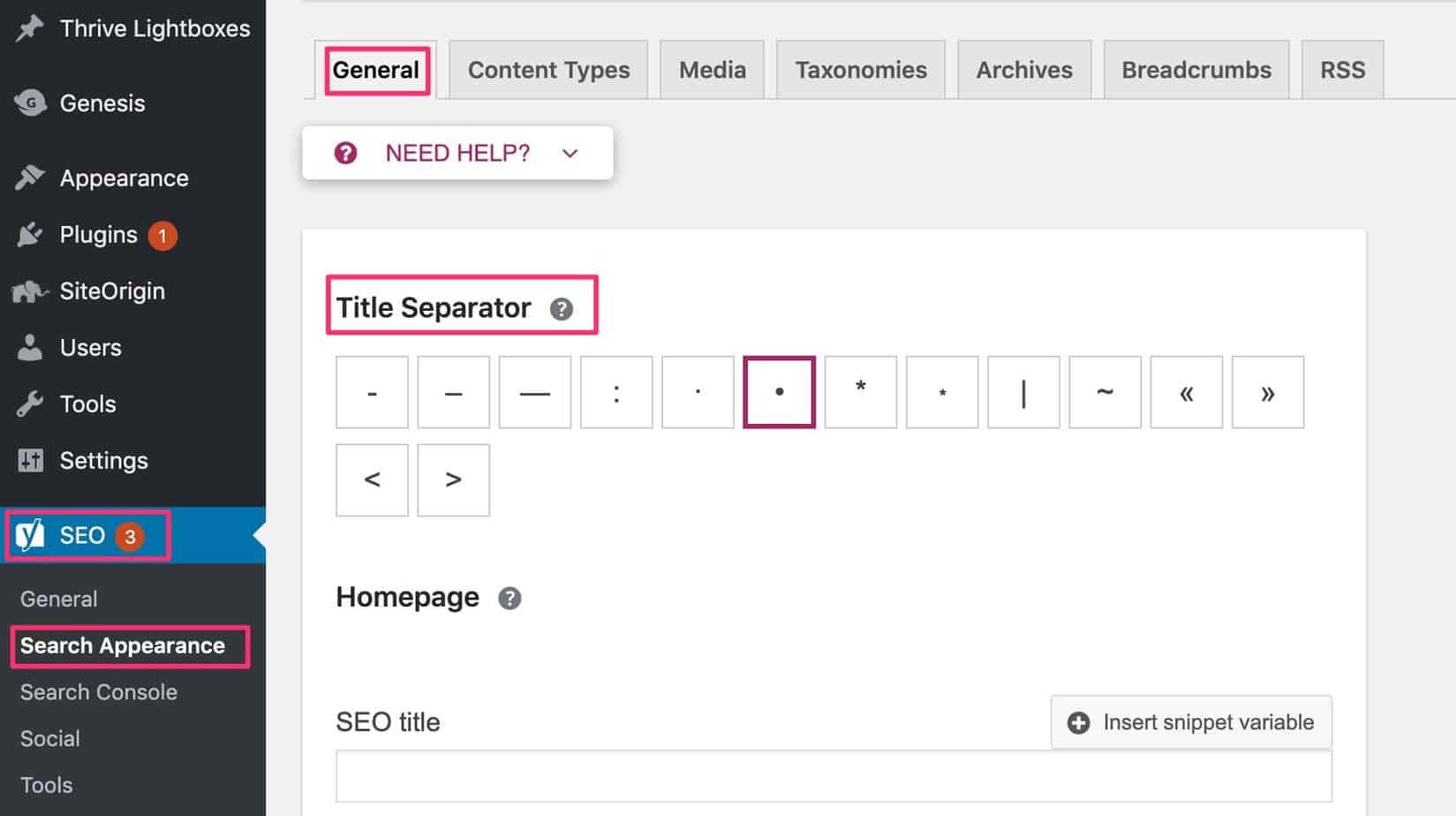 Then go to ‘Content Types’ and remove ‘snippet variables’ until you are left with these three variables: 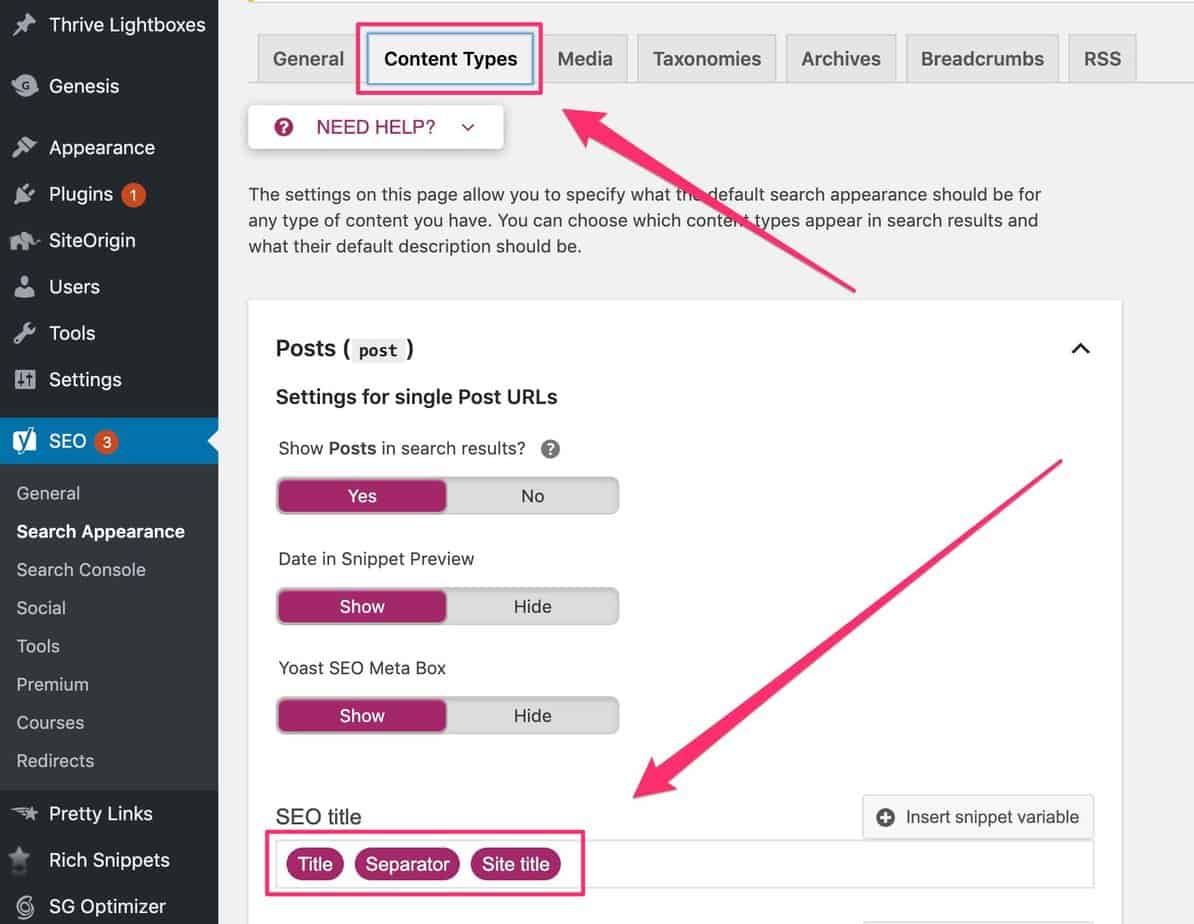 Then hit ‘Save changes’ at the bottom of the page.

Now, when you create a new blog post, Yoast will populate your SEO title with these three variables:

By default, the Yoast plugin inserts the title of your post.

But you can modify the SEO title: it doesn’t have to be the same as the article title (and probably shouldn’t be).

Just click on ‘Edit Snippet’, delete the ‘title’ tag and enter the text that you want for the title: 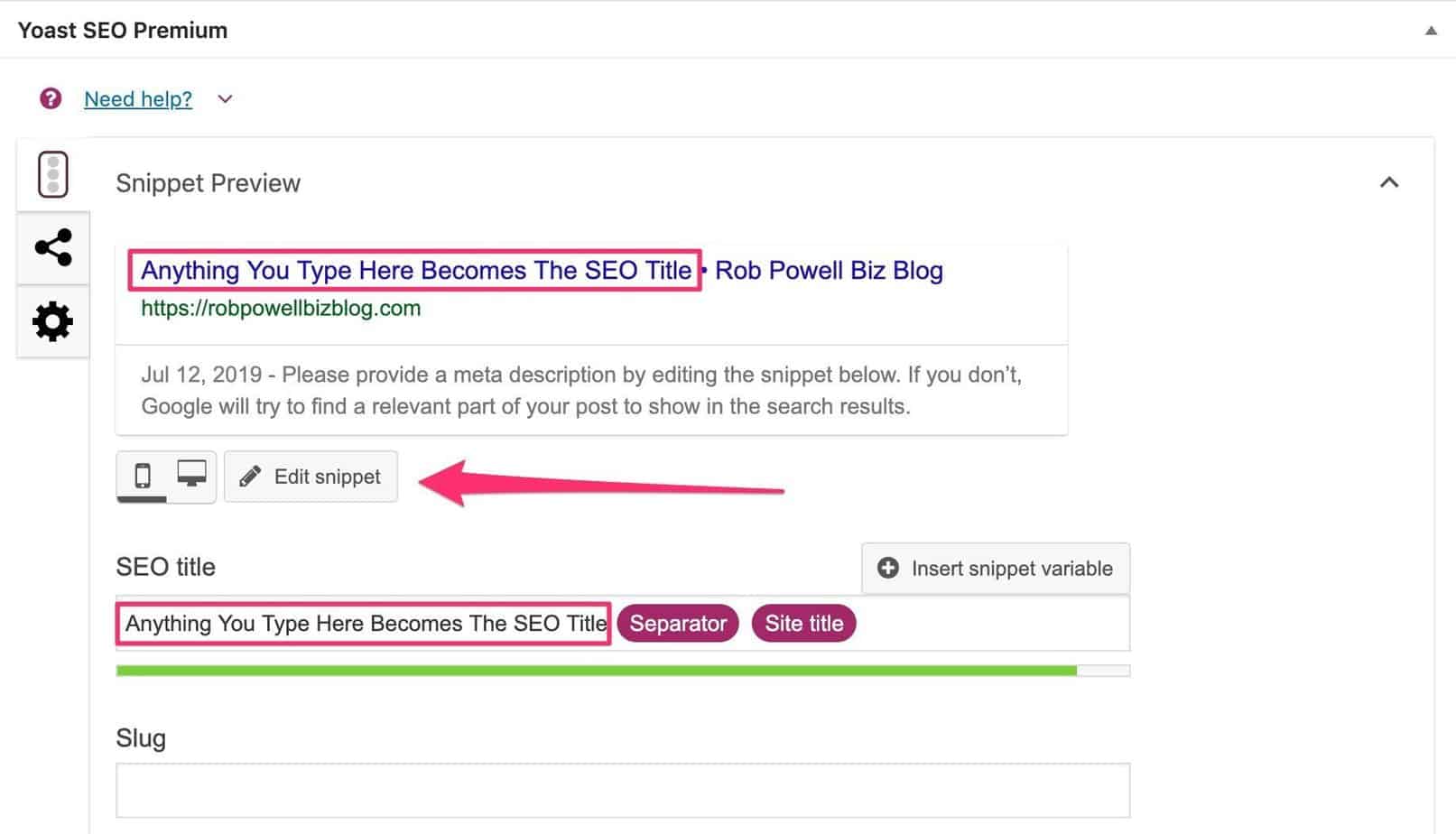 When breadcrumb navigation appears in a SERP snippet, it provides the searcher with valuable context and additional clickable navigation options. This increases CTR.

If your WordPress theme does not already have breadcrumbs, you can add breadcrumb navigation using the Yoast SEO plugin.

Here are instructions on how to do it: 'Implement Yoast SEO Breadcrumbs'

Use Structured Data Markup to help the search engines pull key information into your SERP snippet. Search Engine Journal reports that when they added structured data to their site:

The reason for this is that long tail keywords represent searchers who have a much clearer idea of what they’re looking for. And so they’re more likely to click on a SERP snippet for a long tail keyword.

The correlation between long tail keywords and higher click-through rates, can be seen in

Research conducted by Calculate Marketing. Although this chart refers to paid ads, the findings apply equally well to organic search. 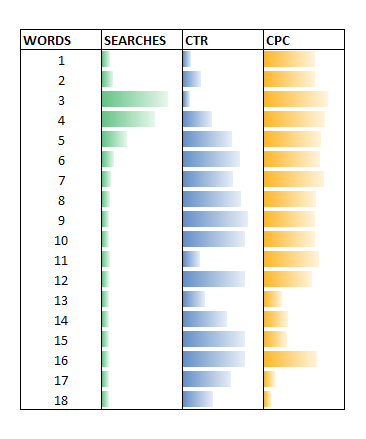 Put simply: long tail keywords produce higher CTRs than head keywords because people who type them into a search engine have a clearer idea of what they want.

Search ranking is directly correlated with page speed: the faster your web page loads, the higher it will rank in the search results. And higher-ranking pages get higher click-through rates.

For tips on how to increase your site speed, see my article: 27 Easy Ways to Reduce Server Response Time in WordPress

To do this, go to Google Search Console > Performance and then click on the ‘export data’ button. Choose ‘download CSV’ and then open the CSV file in Microsoft Excel:

Then just sort the CTR column from high to low: 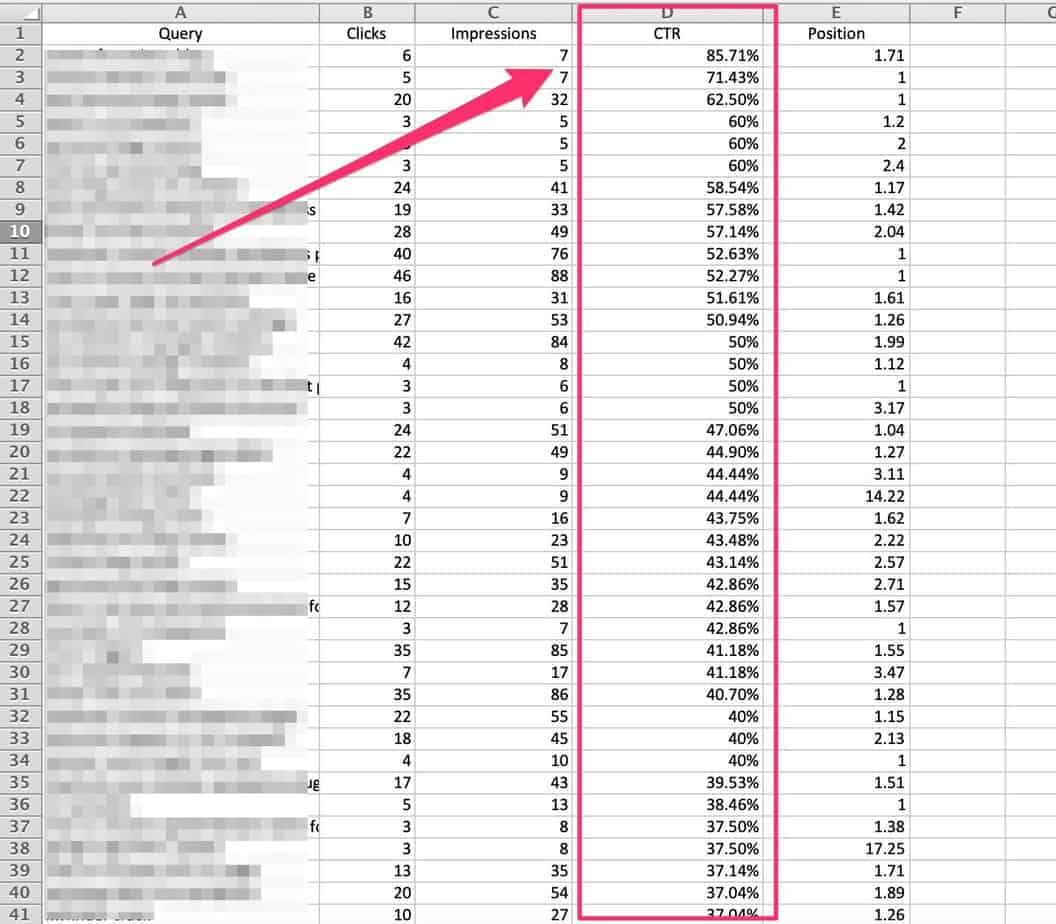 Next, copy a search query (Column A) for a high CTR web page into Google and try to identify what it is in the search snippet that is producing the high SERP CTR.

Do the same for web pages with low CTR: look at the search snippet as it appears in Google and try to see how it’s different from a high CTR page. Have a close look at things like:

Click-Through Rates (CTR) from search results are falling and have been for about 3 years.

Web marketers should always monitor the SERP CTR of their web pages. But now, with half of all searches resulting in no clicks, it's even more important.

Use these 10 tips to increase your SERP CTR and immunize yourself against zero-click search.

This post was most recently updated on September 3rd, 2020