In this article you'll discover: 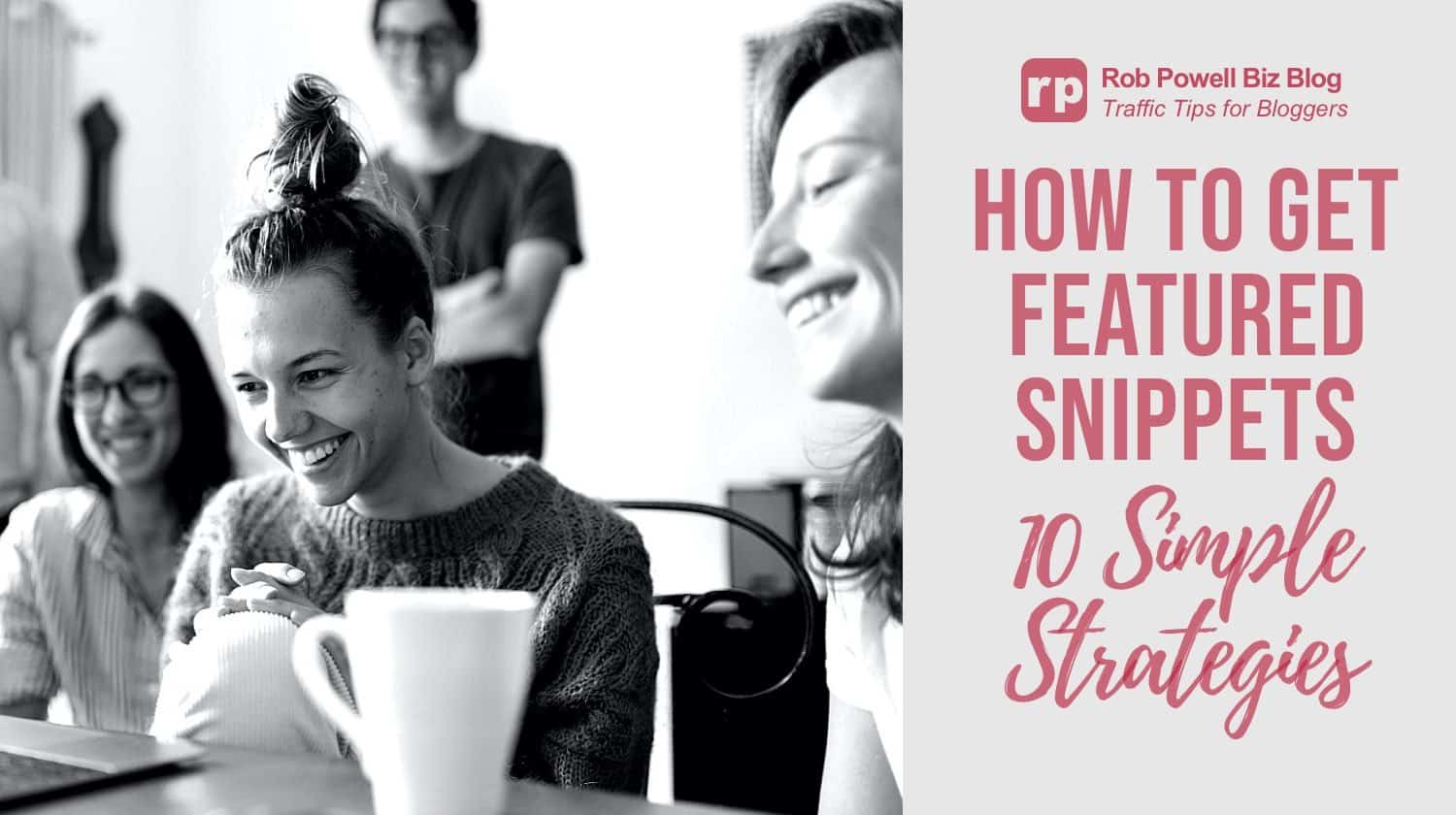 1. What Are Featured Snippets

Simply put, featured snippets are an extract from a web page that gives the searcher a quick answer to their question.

They appear right at the top of the search results. They’re sometimes referred to as 'Position 0' because they appear above the Position #1 search result.

The idea behind featured snippets is that searchers can get the information they’re looking for without leaving the Google search results.

That last sentence might be ringing alarm bells in your head.

After all, why would you want a featured snippet if they’re designed to keep people on Google?

Well, it turns out that people do click on featured snippets.

Ahrefs did a study of 112 Million keywords and found that Position Zero produces 8.6 percent of all the available clicks on Page #1 of the search results.

But remember that to get a featured snippet you already have to be on Page #1. So Position Zero is adding to clicks you are already getting.

Let’s say you’re in Position #5 for your targeted keyword.

According to a Moz study, you’d be getting about 6% of the clicks on Page #1:

Let’s say that Google chooses your page as the source for the featured snippet.

So in a nutshell: Position Zero lets you jump the queue and double your CTR.

But that’s not all:

With a Featured Snippet, you get a massive stamp of approval from Google. Google is saying “this is the most useful result on the page”.

And that means that the people who do click through to your website see you as a trusted expert on that particular topic.

So it’s not just clicks: it’s also about perception: your authority, trustworthiness, and credibility in the eyes of searchers.

The three most common types of featured snippets are:

Of these three types, paragraph snippets are the most common. If you're trying to get featured snippets, these are the ones to go for. They provide searchers with a quick one or two-sentence answer to their search query. 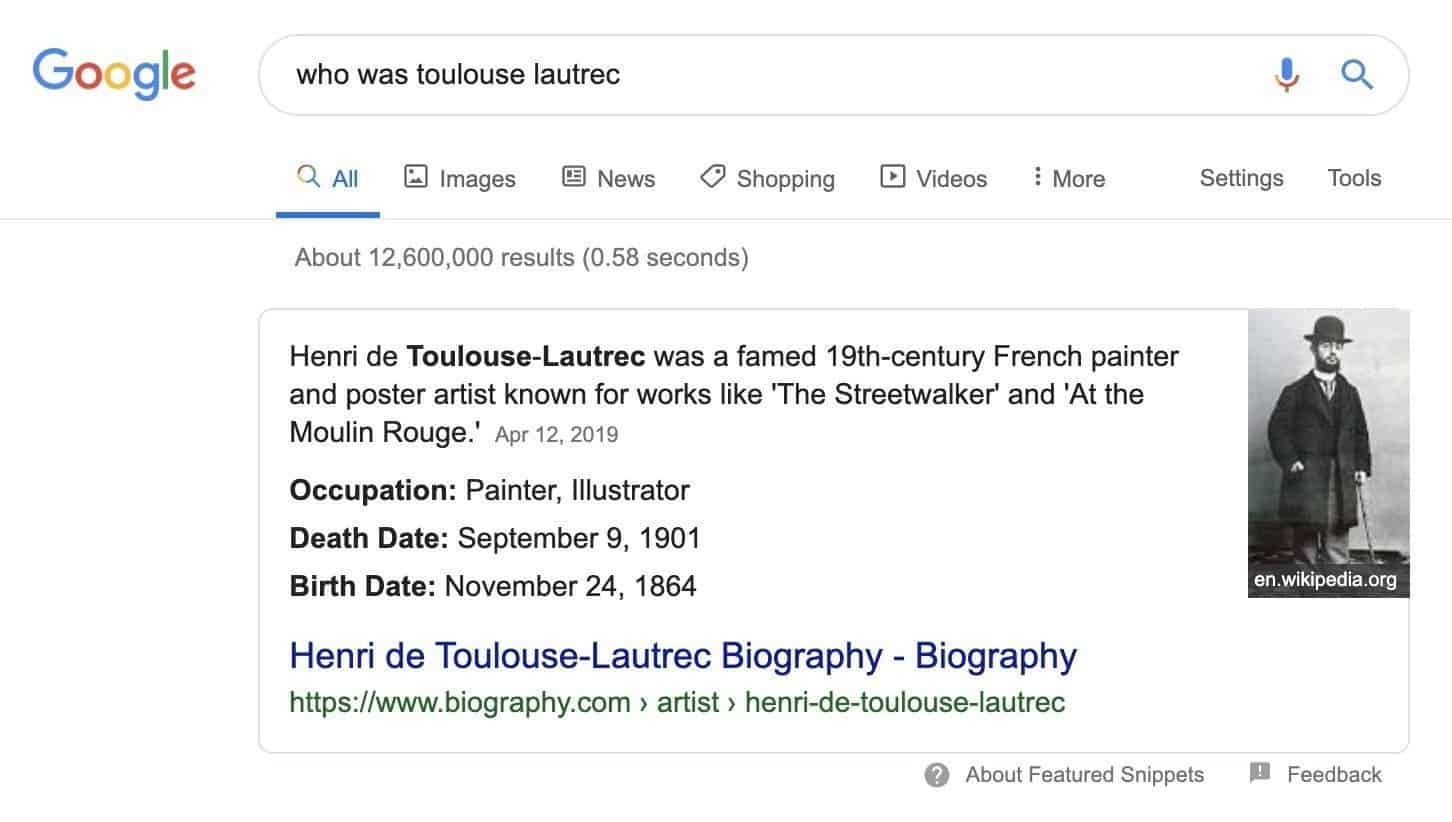 A ‘List Snippet’ is an extract from a web page that shows a relevant answer in list form: 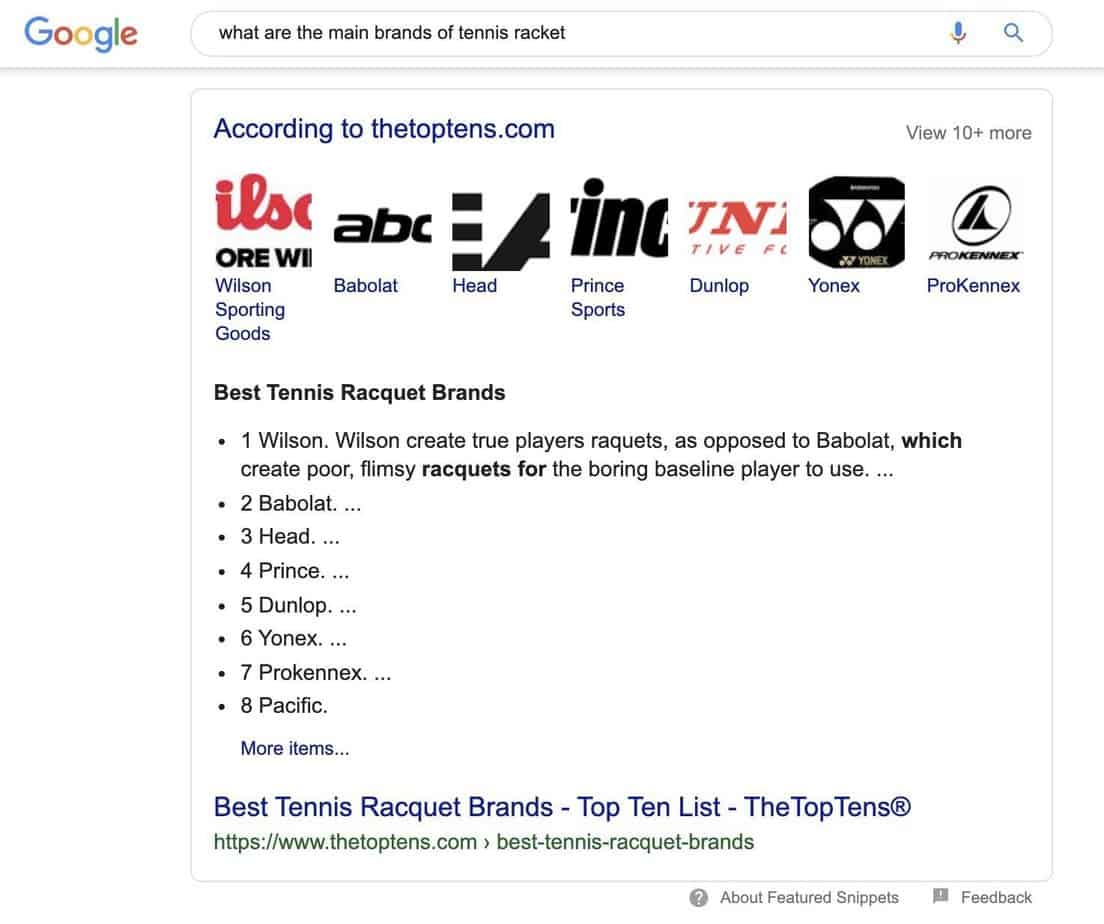 A Table Snippet is an extract from a web page that shows relevant data in rows and columns: 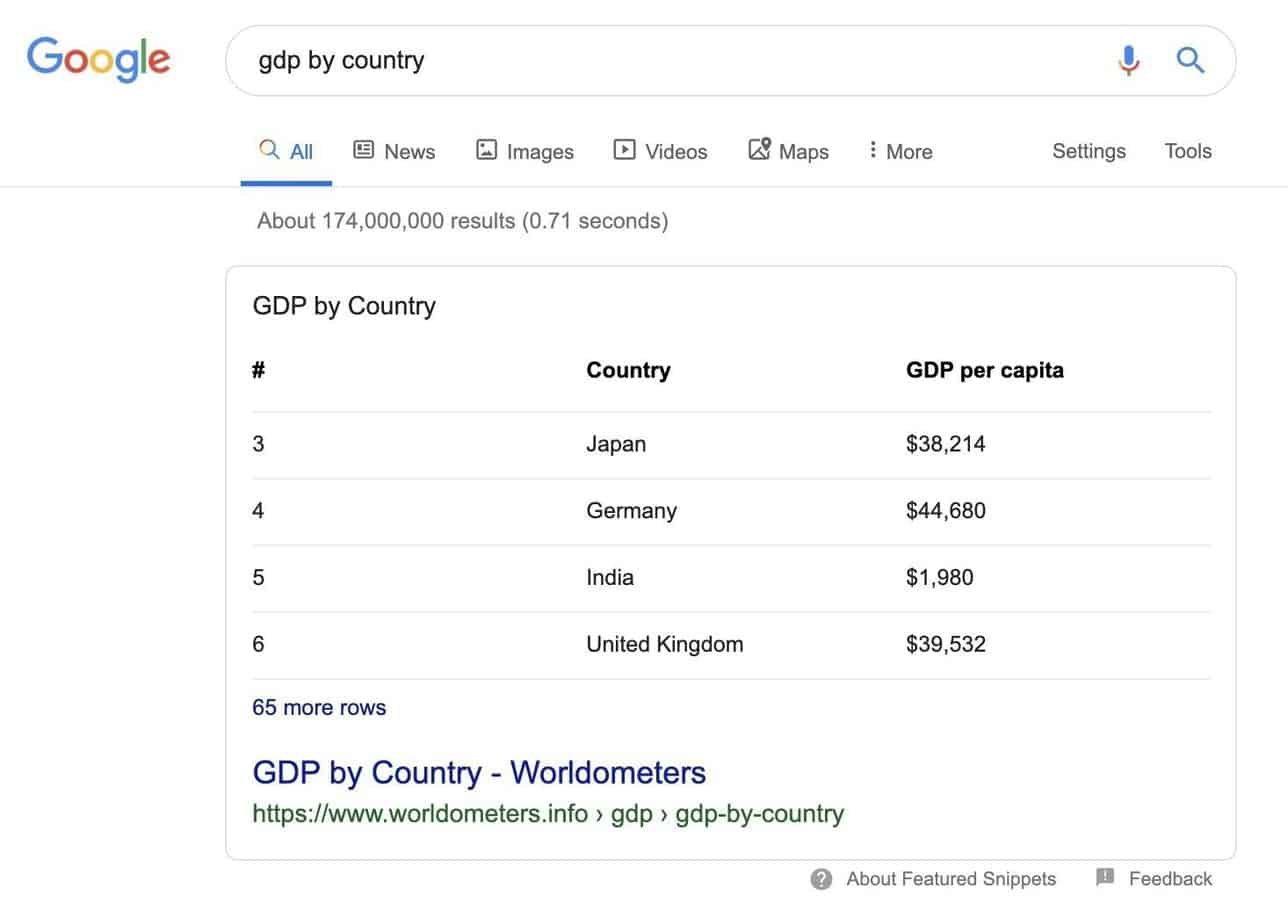 4. How To Get Featured Snippets

So, how do you get featured snippets?

First, you need to get on Page #1 of Google for your targeted keyword.

According to research by Ahrefs, 99.58% of featured snippets come from pages that already rank in the top 10 positions on Google.

But you don’t need to be in the top position to get Position Zero.

Getstat reports that 70% of snippets come from sites that rank lower than Position #1.

This goes back to what I was saying earlier: if your page is half-way down the SERPs, a featured snippet is a nifty way to ‘jump the queue’ and go right to the top.

So, being on Page #1 of Google is pre-requisite for getting Position Zero.

But you also need to organize, structure, and format your content in a way that lends itself to being chosen by Google for the featured snippet.

And that’s what I’ll show you how to do in the next section.

5. How To Optimize For Featured Snippets

And so in this section, I’ll be focusing on how to optimize your content to get either paragraph snippets or list snippets.

Most paragraph snippets are short answers to questions that people type into Google.

So right off the bat, we know that Google is looking for short sentences that contain answers.

Now, the algorithm knows that answers are often preceded by questions. So it’s a good bet that a ‘question and answer’ style of writing will lend itself to getting a featured snippet.

The question can be a single line in a paragraph, or it could be in a header or sub-header.

Instead of saying: “In Tennis, there are four Grand Slam tournaments”, ask a question first:

How many Grand Slam tennis tournaments are there?

There are four: the Australian Open, the French Open, the US Open, and Wimbledon

Instead of saying “A content delivery network or content distribution network is a geographically distributed network of proxy servers and their data centers”, ask a question:

What is a CDN?

A CDN or content delivery network is a system of distributed servers (network) that deliver pages and other web content to a user, based on the geographic locations of the user, the origin of the webpage and the content delivery server.

In summary, here’s how to use the Q & A format to get featured snippets:

Another way to get featured snippets is to include at the end of every article an FAQ section.

If you’re not sure what questions and answers to include, just type your main keyword into Google, and scroll down the SERP page until you find the “People Also Ask” section.

Here’s an example. Let’s say you are writing an article on “How to dress like Kate Middleton”.

Here are four questions you could include in your FAQ section: 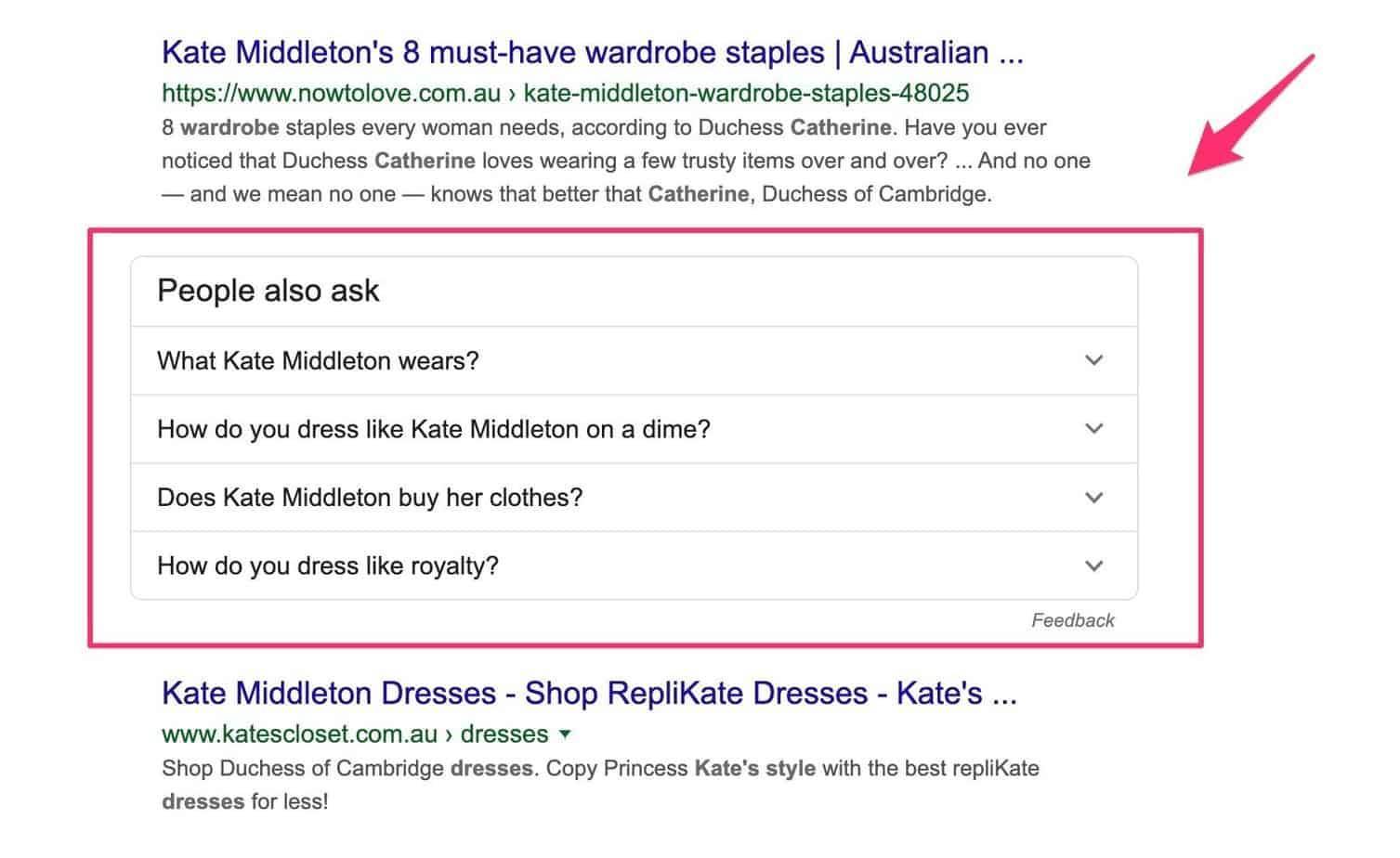 When you’re trying to optimize a sentence to appear as a featured snippet, make it 40 to 50 words in length.

SEMrush analyzed over 10 million keywords across 1 million domains. They discovered that most featured snippets are 40 to 50 words in length.

According to the Ahrefs study I mentioned earlier, certain words are found in featured snippets more than any other words.

If you’re trying to fine-tune a 40 to 50-word sentence so that it gets chosen as featured snippet, you would do well to include as many of these 30 words as you can: 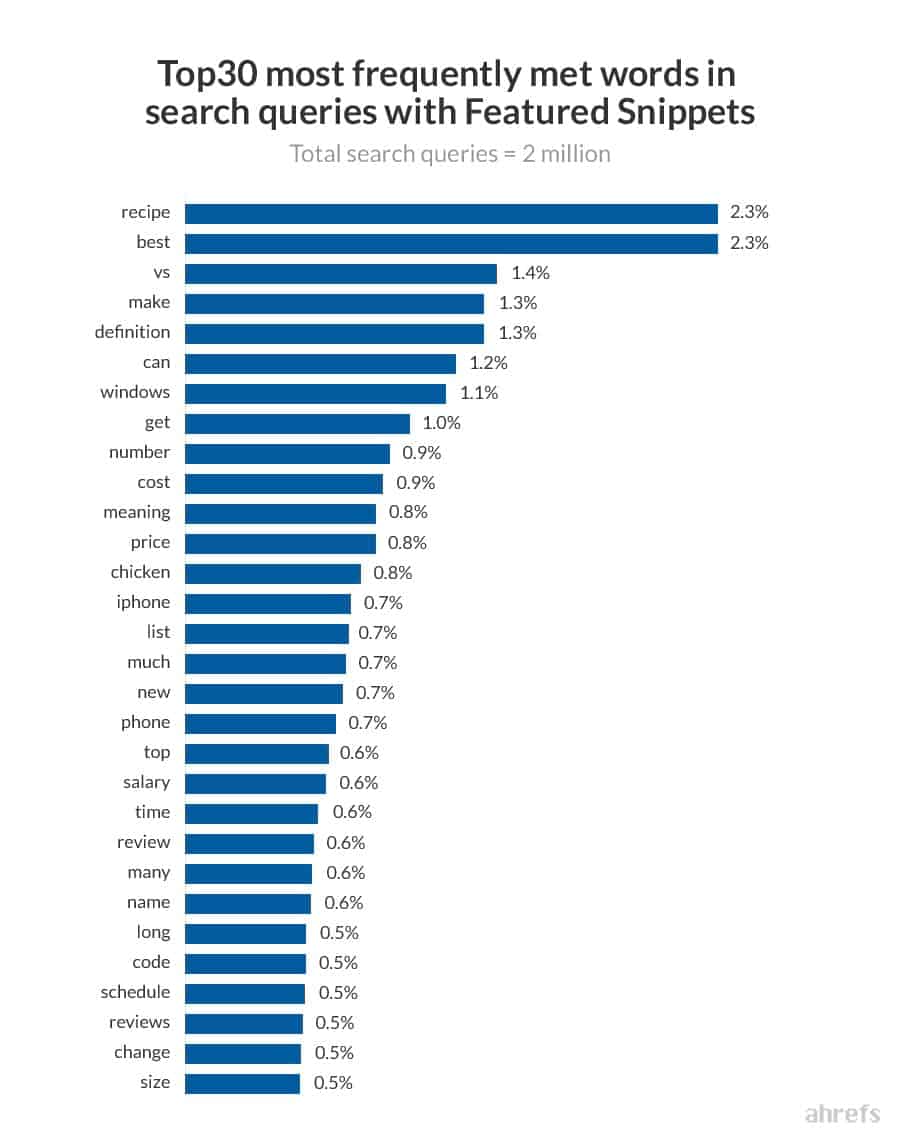 Content that is formatted in a particular way seems to attract the featured snippet algorithm.

Wherever possible, use these format types in your articles or blog posts:

However, questions do tend to produce featured snippets. Just go to Google and type in any question, and chances are you’ll get a Position Zero result.

So one way to optimize your content for Position Zero is to do keyword research that focuses on questions.

And a good tool for doing that is Answer The Public.

If I was writing an article about ‘exercise bikes’, these are the questions this tool would give me: 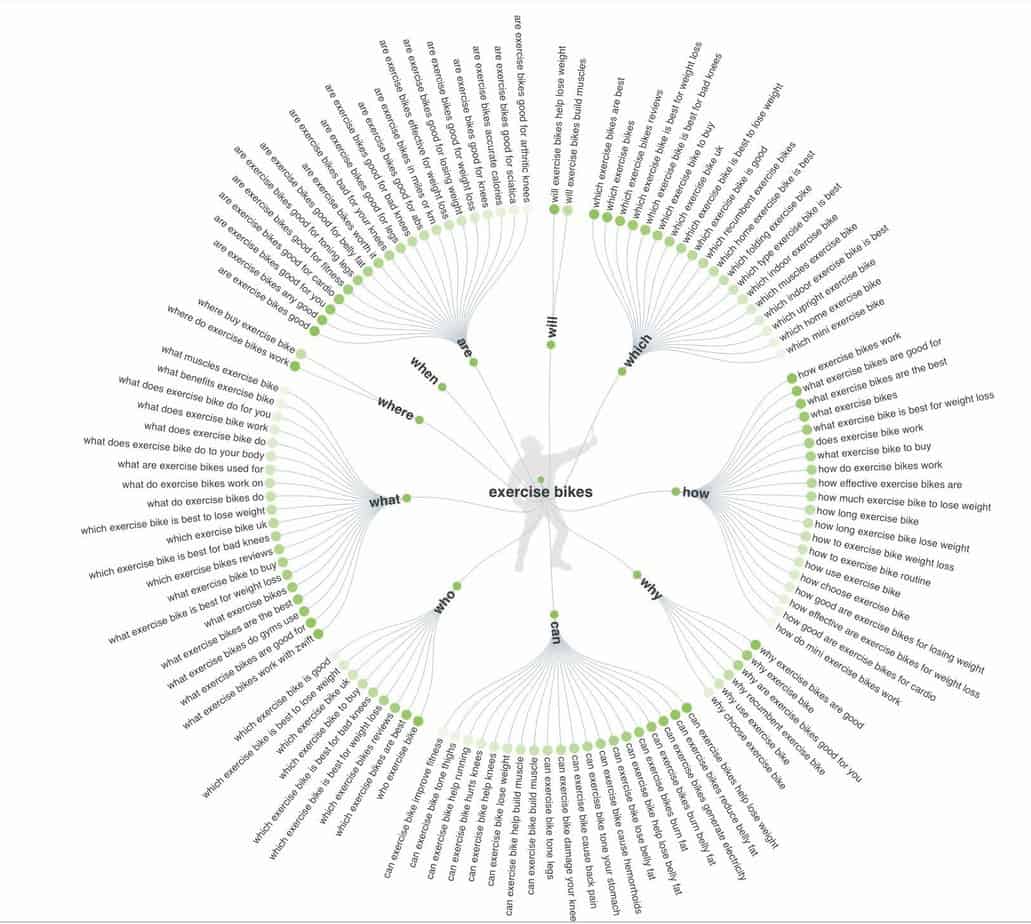 As you can see, there are enough questions there to target multiple featured snippets. 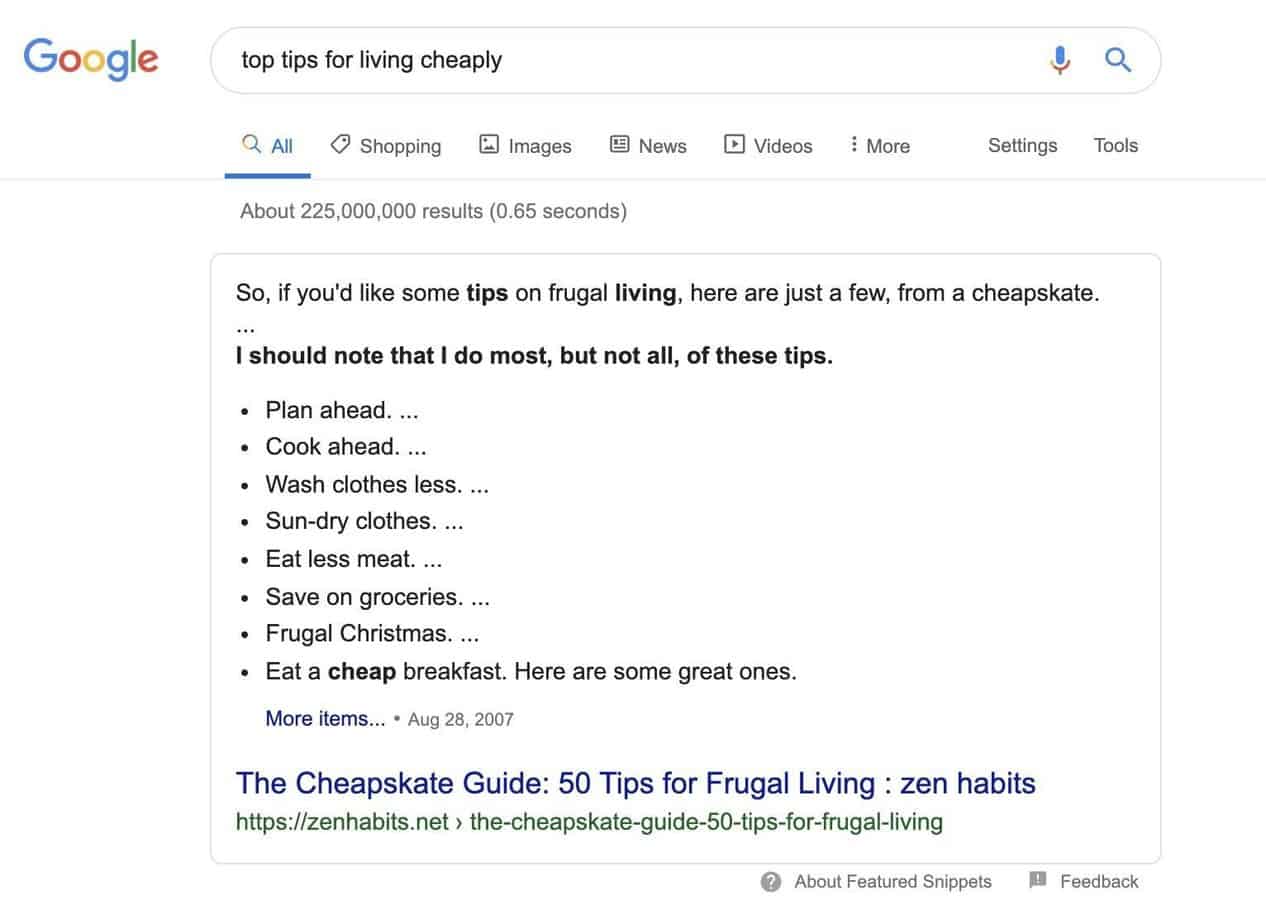 The page this snippet was taken from ranks in Position #3. The article is a listicle, formatted as a numbered list.

There was no obvious trigger for this featured snippet, except for the title: ’50 Tips for Frugal Living’.

This goes to show how advanced the Google algorithm has become: it’s no longer bound by individual keywords and fully understands context.

Example 02 - 'how to save money in the kitchen' 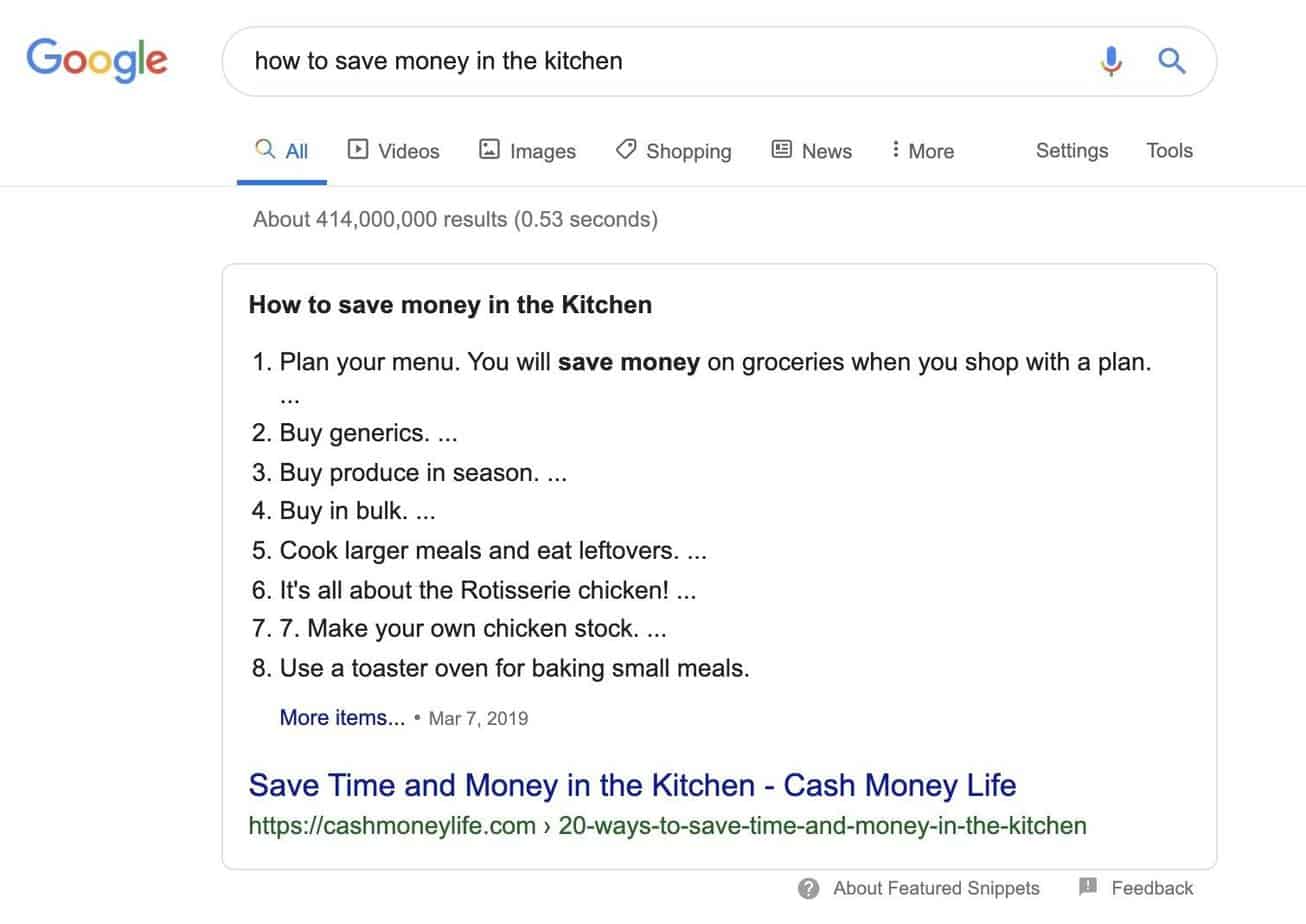 In this example, the page the snippet was taken from occupies Position #3 in the search results. The article is formatted as a list of items enclosed in paragraph tags.

The trigger for this Position Zero listing was the heading: ‘How to save money in the kitchen’, enclosed in H3 tags:

This Position Zero came from a page that occupies Position #4.  Although it's a paragraph snippet, the text was taken from an item in a list.

Item 6 contains 54 words, which is right in the zone for getting a Featured Snippet: 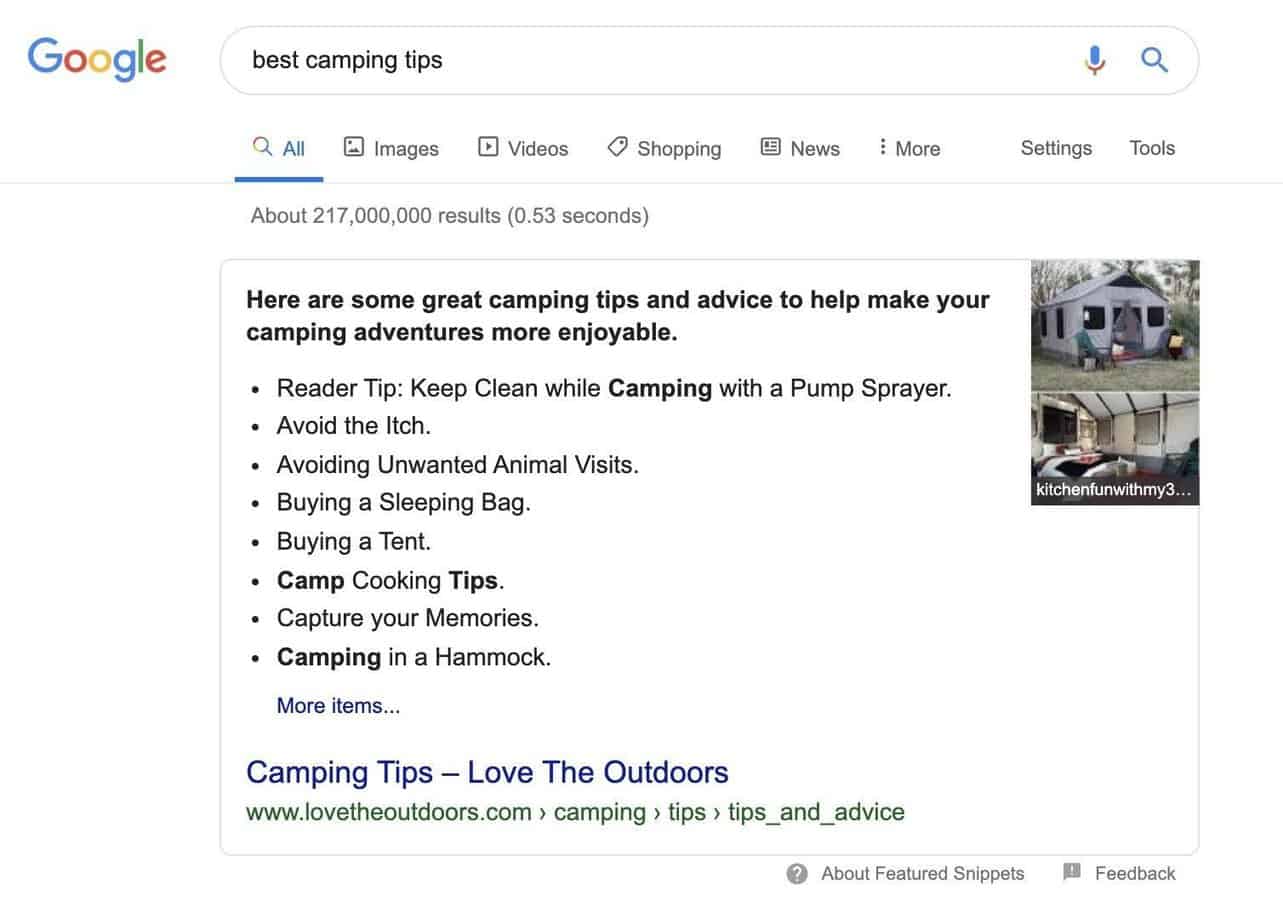 This snippet is taken from a page that ranks at Position #5.

In this instance, Google has compiled the list from a series of links to other articles on the same website. The links are formatted with a simple paragraph tag.

Nothing fancy here! This example illustrates how Google can compile a Position Zero listing from almost anything: 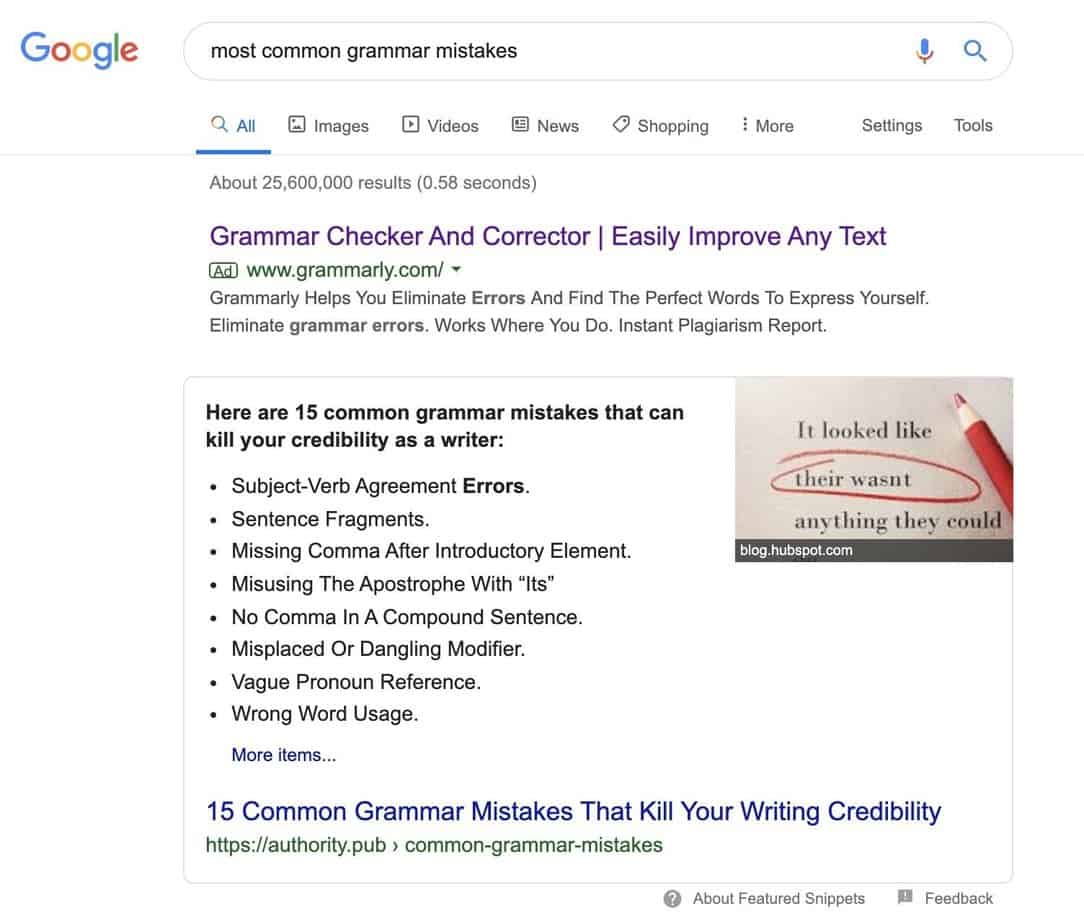 This example is taken from a page that ranks in Position #2. The article is formatted as a list of items, with each item enclosed in H3 tags:

The trigger for this snippet was the title of the article. But notice how the author repeated the keyword phrase in am H2 header: 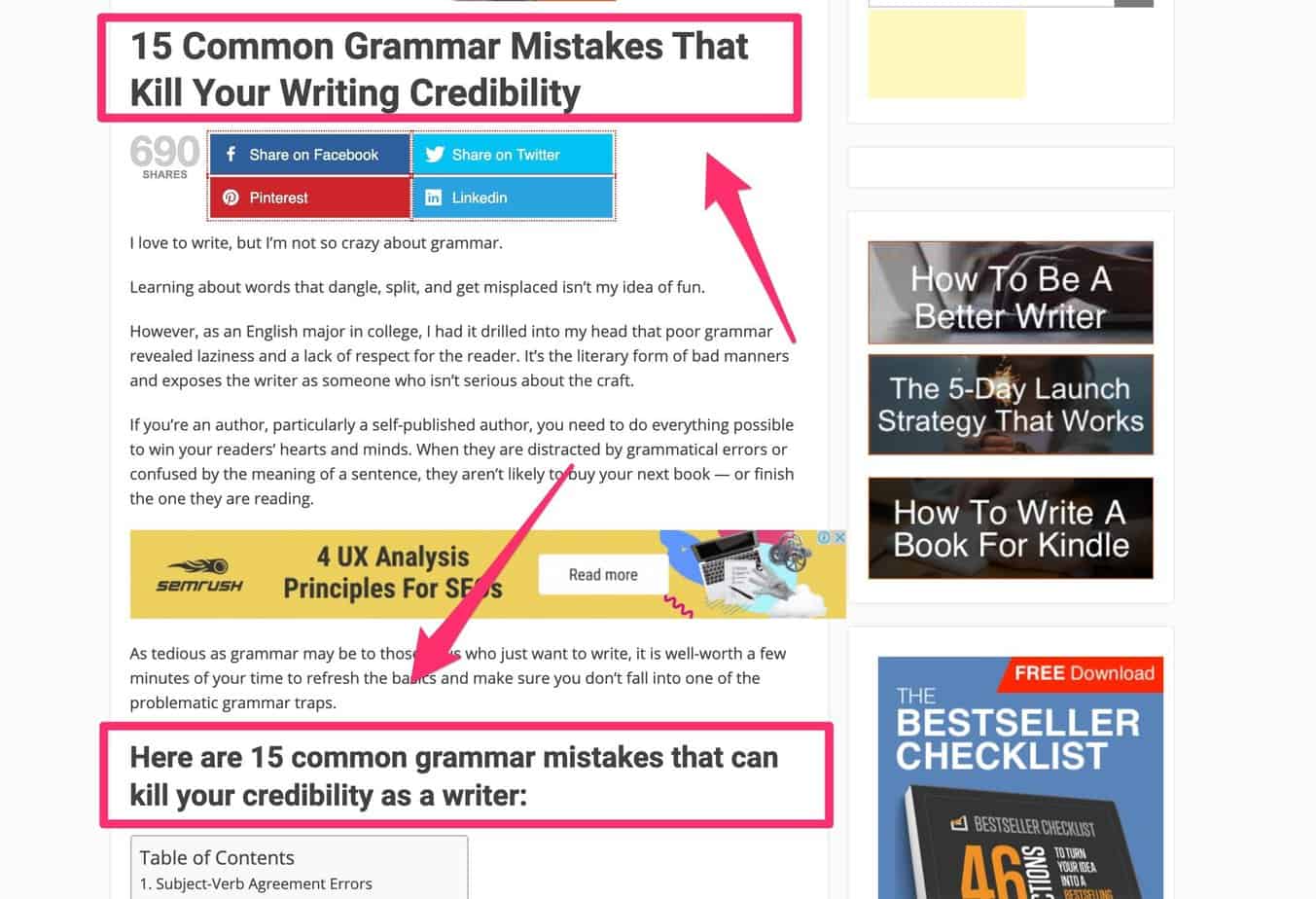 Takeaway: include your keyword phrase as a header just before your list of items. This gives you another potential trigger for a Position Zero listing. 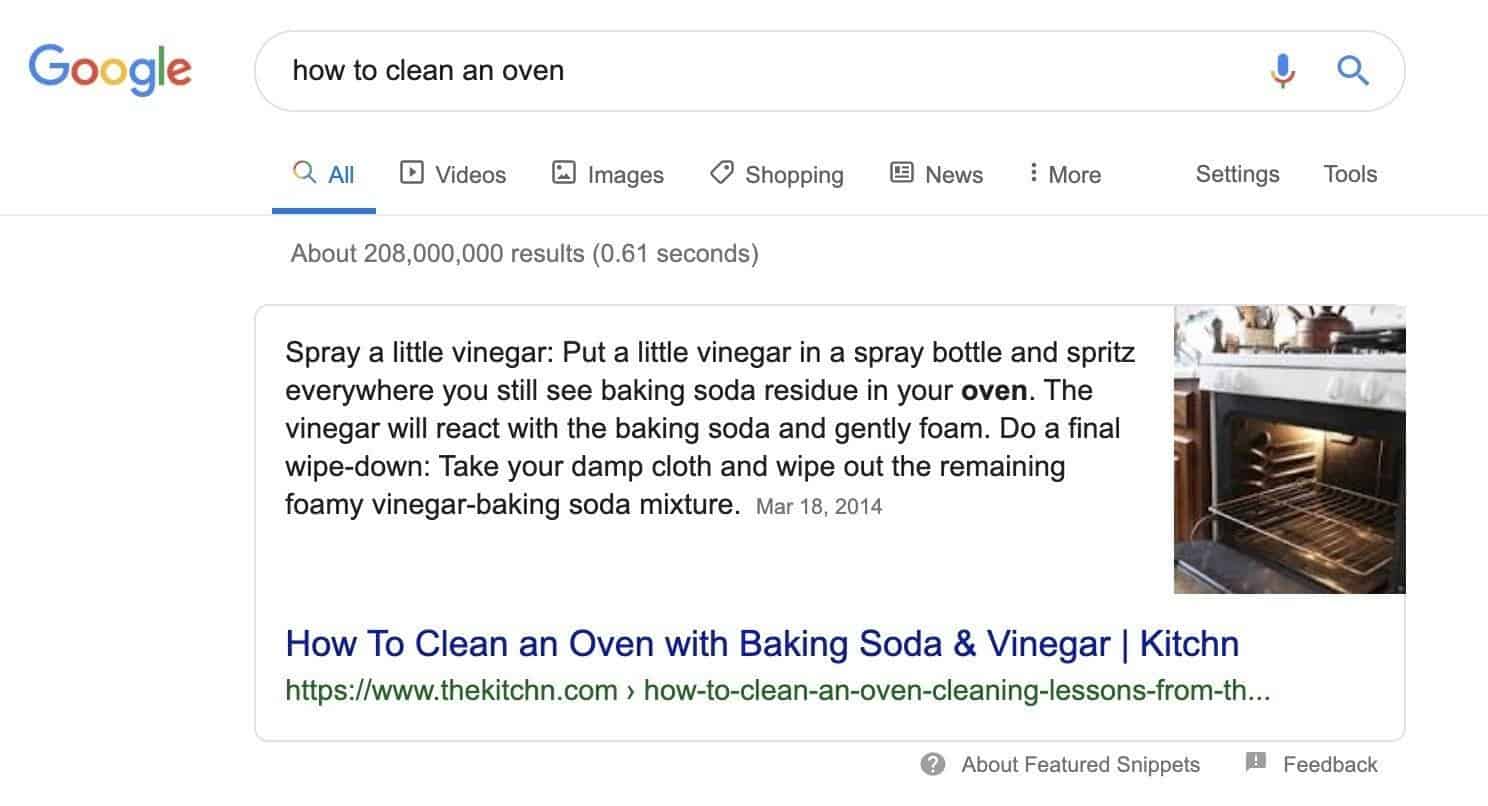 This one came from a page that ranks in Position #1. The article is formatted as a numbered list. However, it appears in a paragraph snippet, so clearly the numbered list was not a relevant factor:

Example 07 - 'how to tell if your partner loves you' 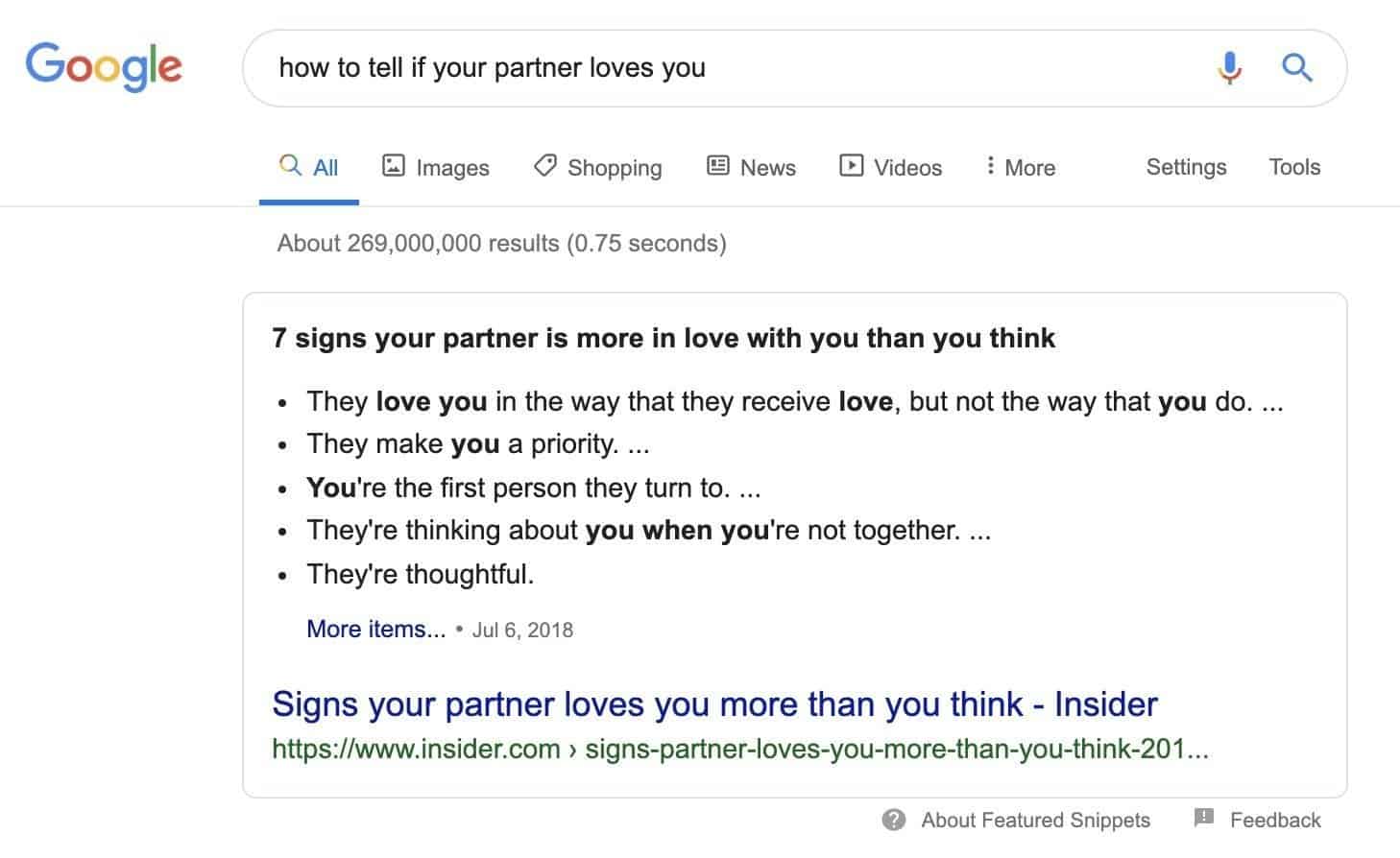 This Position Zero result comes from a page that ranks in Position #2 in the search results.

The article is formatted as a list, with each item enclosed in H2 tags:

This snippet was taken from a page that ranks in Position #4.

The title of the article (‘Cleaning Windows with Vinegar Without Streaks’) is quite different from the search query that produced the Featured Snippet. Indeed, the words ‘best way’ don’t appear anywhere in the article. 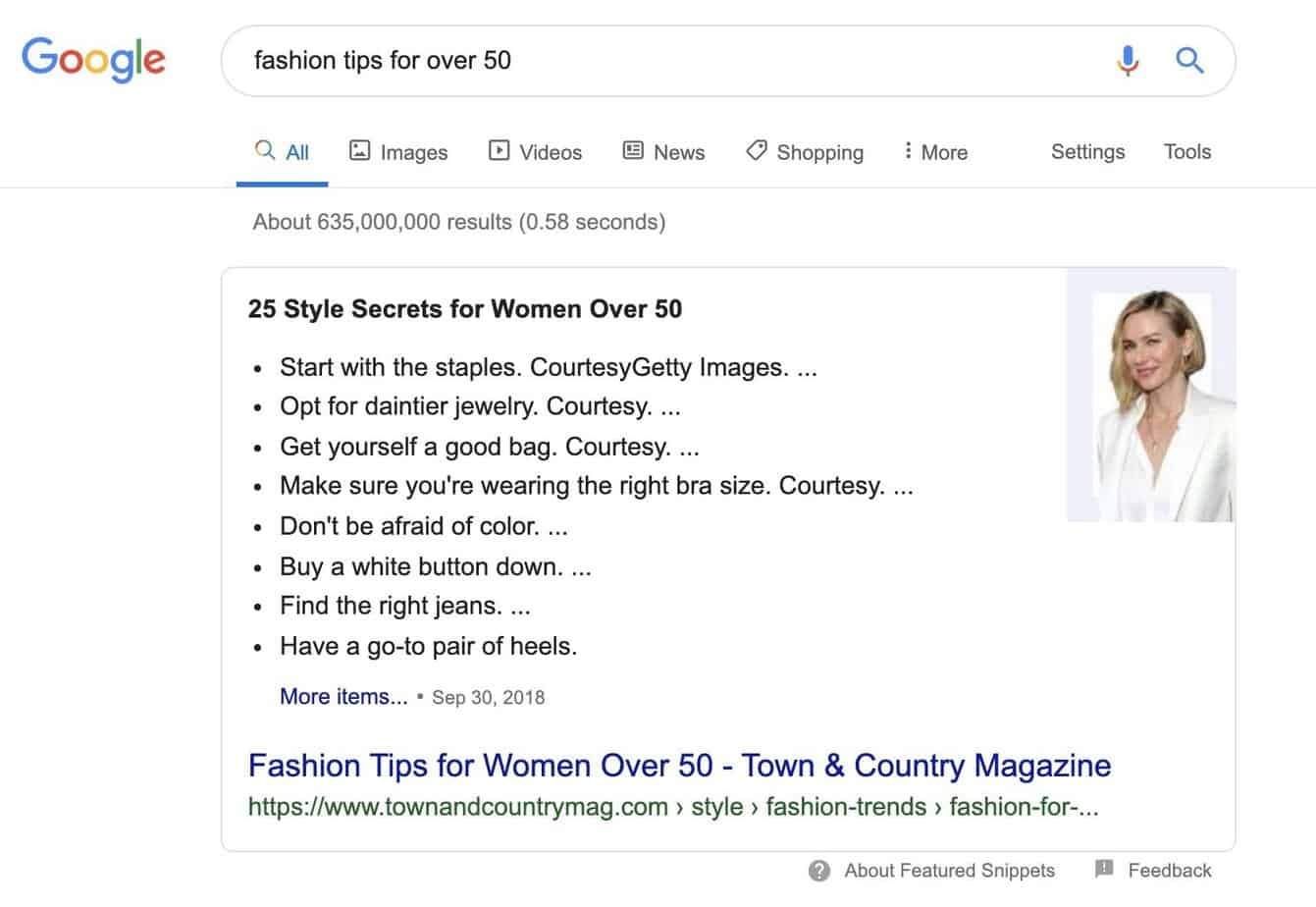 This snippet came from a page ranked in Position #2 in the search results. The article is an unnumbered list, formatted without list tags or H2/H3 tags: 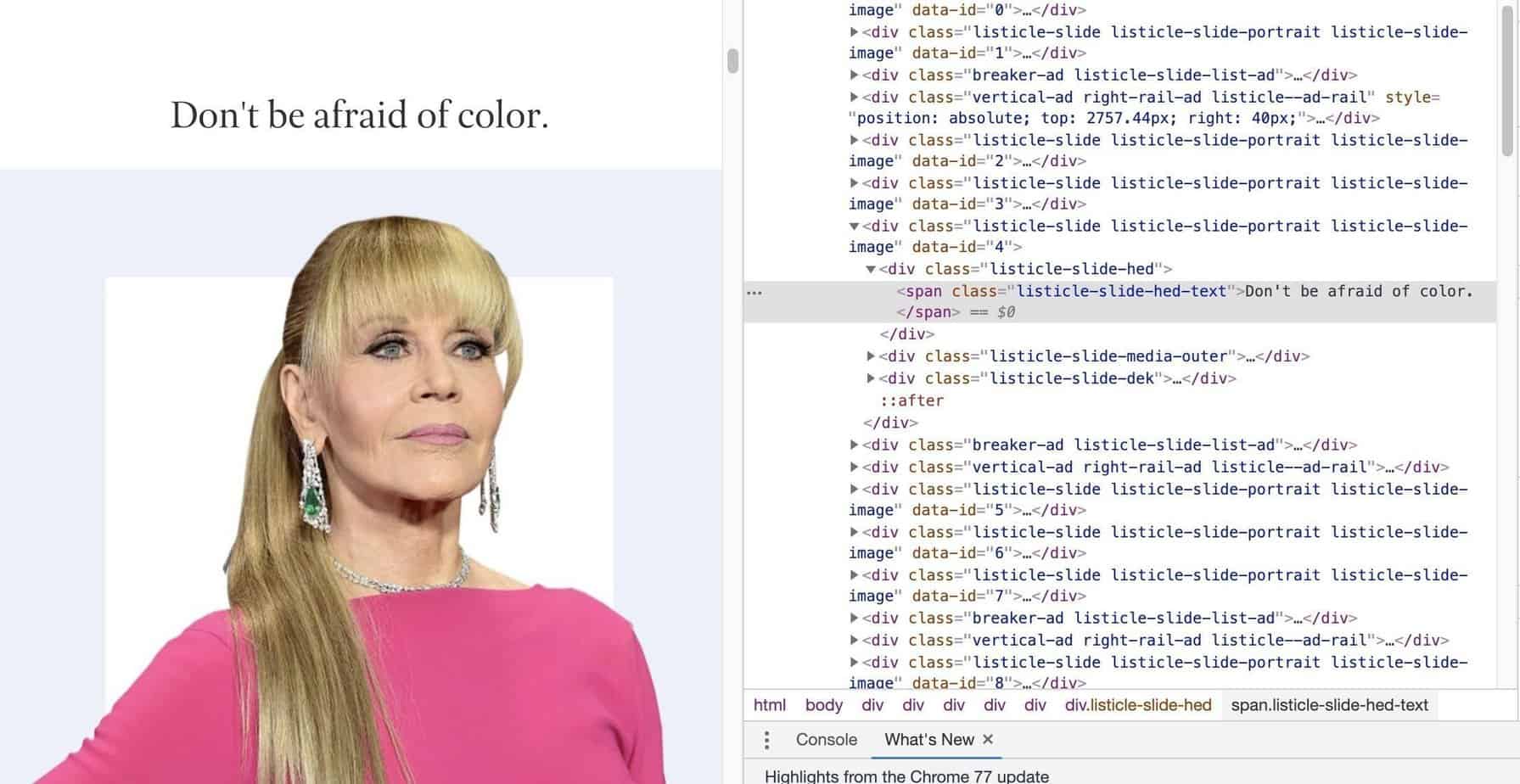 The title of the article (‘25 Style Secrets for Women Over 50’) doesn’t match the search query that produced the snippet. Again, this shows the degree to which Google understands context.

Example 10 - 'what is lifestyle blogging'

This Position Zero result was taken from a page that ranks in Position #3. Two points stand out in this example:

2. The text that was quoted in the Featured Snippet was preceded by two Featured Snippet Triggers: (1) a transition that reads: “First things first, what is a lifestyle blogger?”, and (2) before that, a headline that reads “What is a Lifestyle Blogger?”:

As we’ve seen in the previous examples, Google certainly doesn’t need such explicit cues to find definitions, but they certainly help.

Takeaway: (a) before you give a definition, ask a conversational question: “So what is a ______?, and (b) include a header before the definition that asks the same question.

The header ‘What Is a Lifestyle Blogger’ is enclosed in H3 tags: 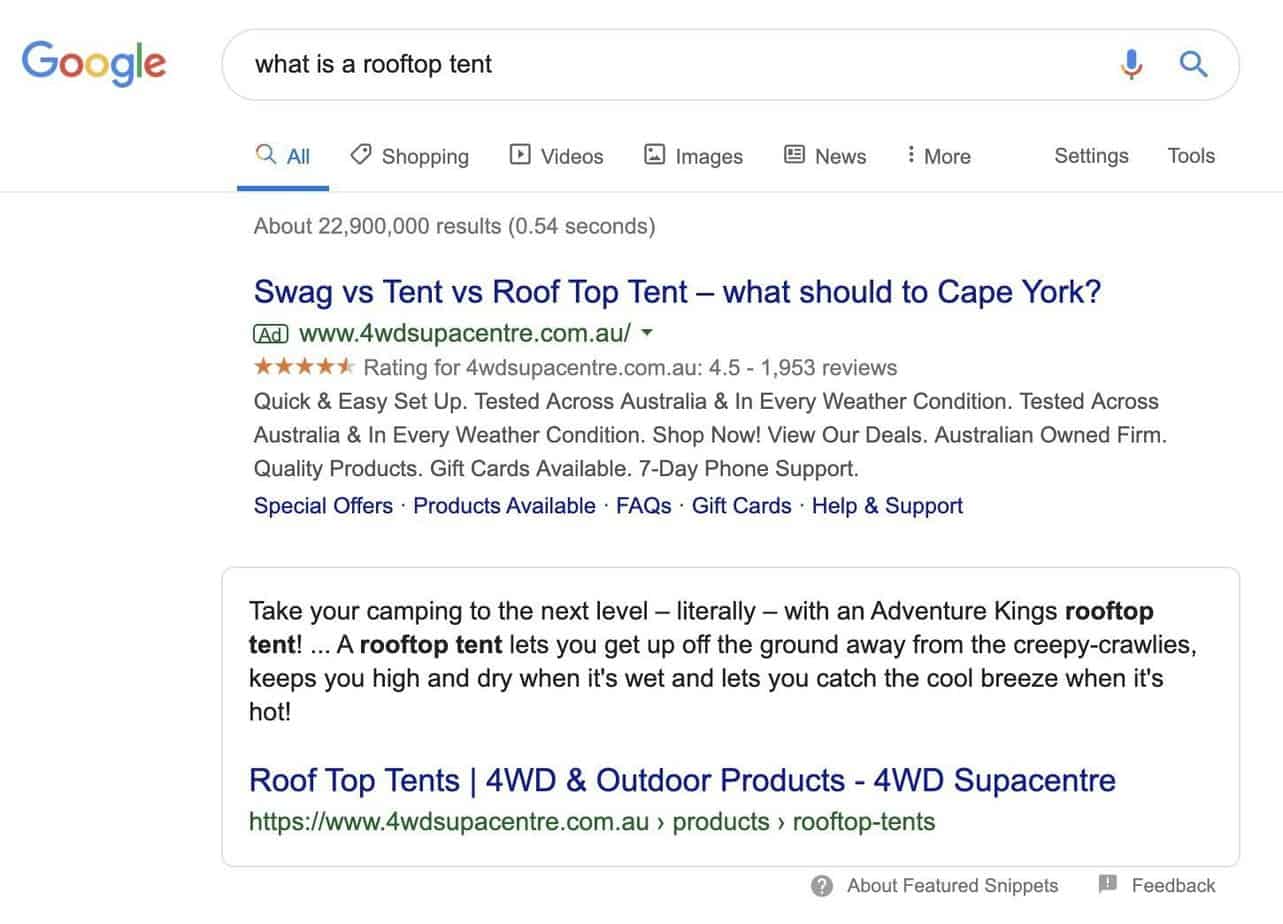 This Position Zero result was sourced from a page that ranks in 4th place on Page One of Google. The text was taken from a paragraph near the beginning of the article:

The quoted text is preceded by a header, enclosed in H1 tags, which may have acted as the trigger for the Featured Snippet: 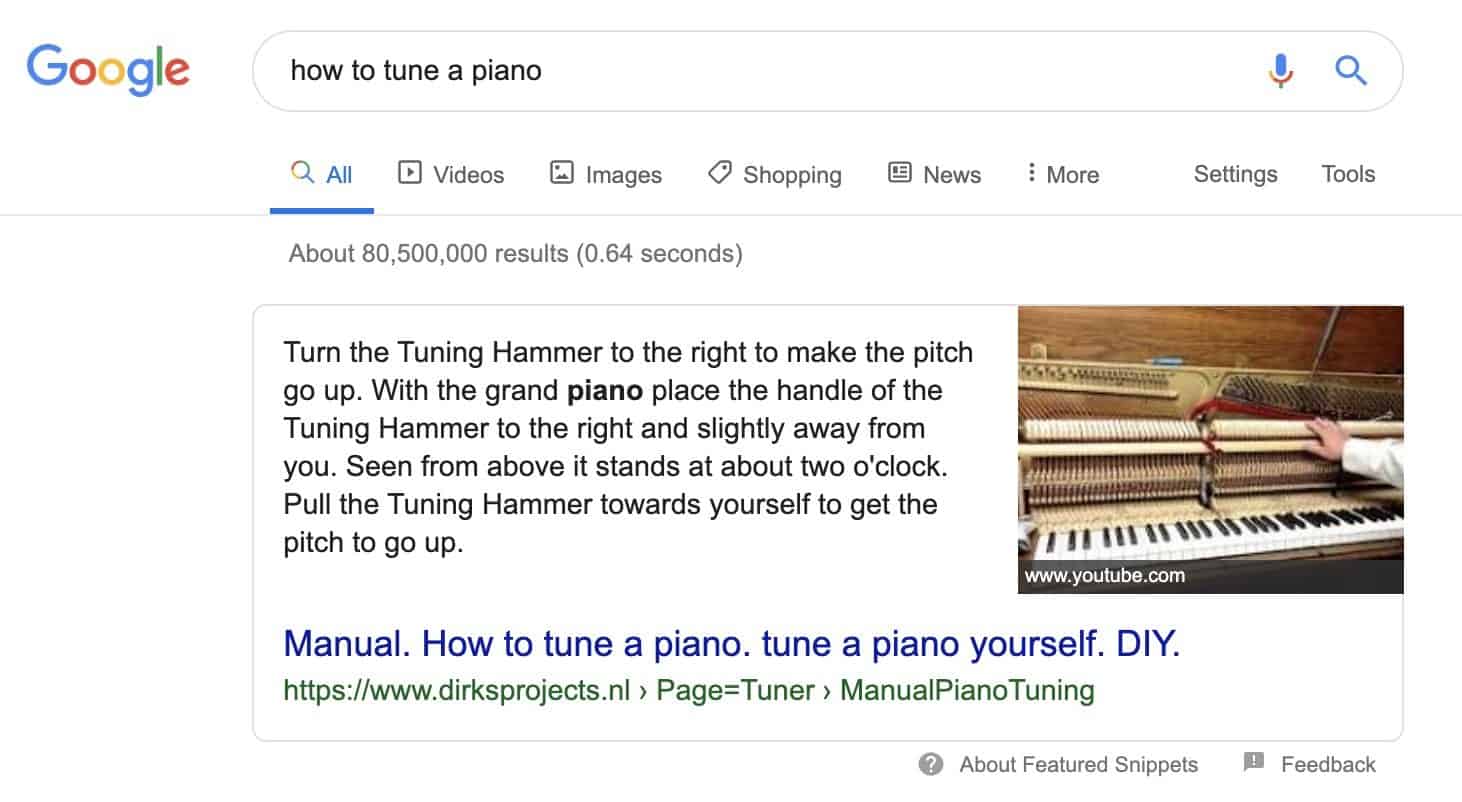 This snippet has been taken from a page that ranks in Position #2 on Google. The text used in the snippet looks to have been randomly selected: any other text from the page would have served just as well.

The trigger for this featured snippet was most likely the title of the page: “How to tune a piano”, enclosed in H1 tags: 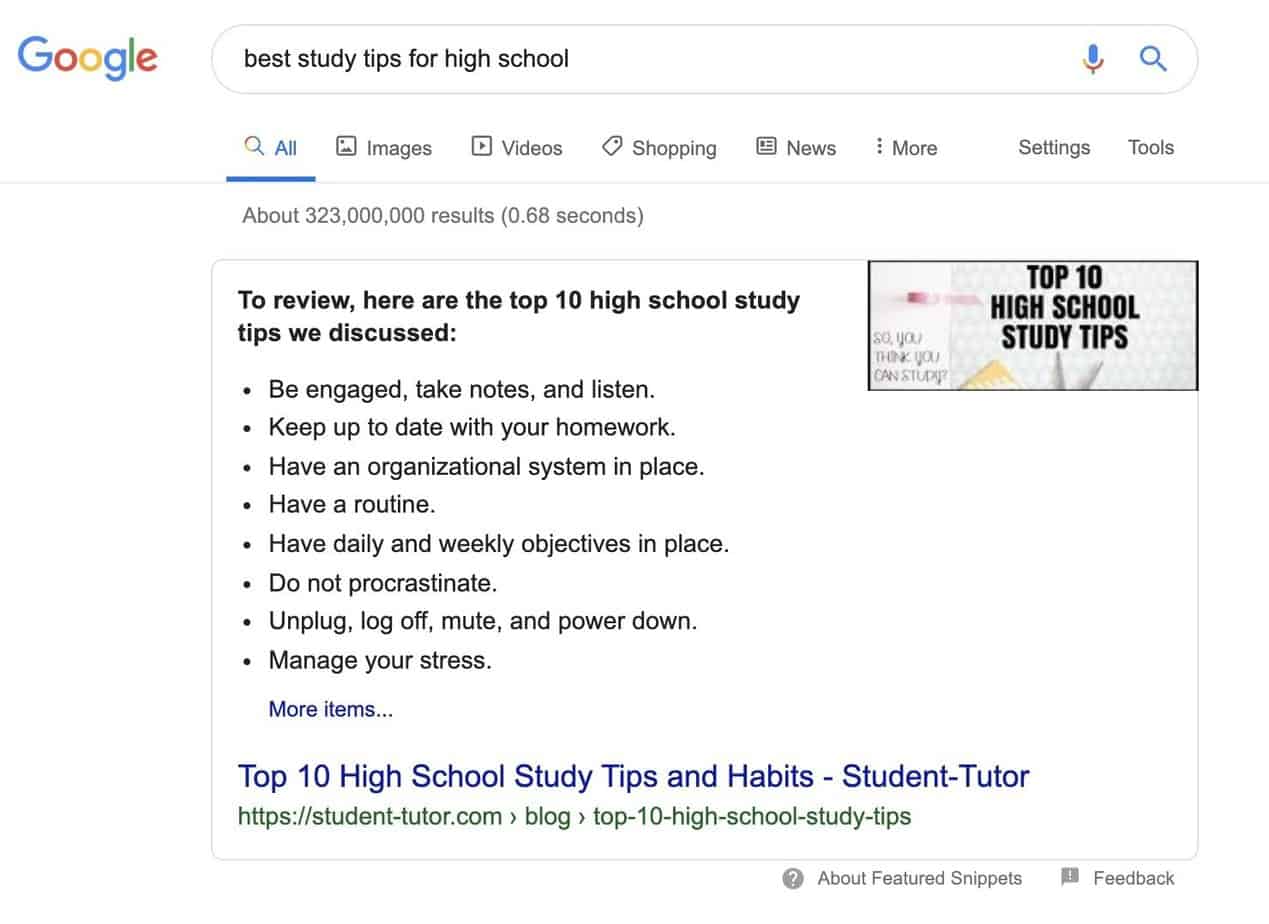 This featured snippet was taken from a page that ranks in Position #4 in the search results.

The text in the snippet comes from a list of tips, where each item has been formatted as heading with an H2 tag:

The trigger for this Position Zero listing was the title of the article: 'Top 10 High School Study Tips'.

Featured snippets are a great way to get more traffic if you already rank on Page #1 of Google for your chosen keyword.

They also build credibility in your personal or company brand because with a featured snippet, Google is effectively saying “this is the most useful answer on the results page”.

But don’t just write great content and then hope you get chosen.

Here again are the 10 tips for getting featured snippets:

This post was most recently updated on August 31st, 2020