Writing catchy titles for articles is a key part of on-page SEO. Catchy article titles result in a higher click-through rate (CTR) from the search results.

This article gives you 21 tried and tested formulas for getting clicks from your blog post titles.

While CTR from the search results may not be a direct ranking signal, it more than likely affects ranking indirectly, as Larry Kim shows in this article.

In a nutshell: the more people who click on your SERP snippet, the higher your page will rank.

And that's why the SEO title is the most important part of your article.

So how do you write catchy SEO titles?

But let's look at it in more detail.

In this article, I'm going to show you 19 (+1) headline formulas that are used over and over again in online marketing.

Why do people keep using these formulas?

This is the key ingredient in writing catchy titles for articles: use numbers!

Numbers produce order out of chaos (God made the world in 7 days). They also promise something people can read quickly, as in a list post:

Guides usually cover a topic from A to Z, so the word ‘guide’ suggests your article is authoritative. That's going to help you get more clicks:

One way to write catchy titles for articles is to create a curiosity gap. A curiosity gap is where your reader is left wondering what something is. Here's an example:

On one level, you probably know that this is a ploy to get you to click on the link. But on another level, you're wondering what Tip #3 is: it could be a tip that you've never heard before. And there's only one way to find out - so you click on the link.

Here's another way of creating a curiosity gap. Whenever you insert the word ‘the’ before a number, it implies that these are not just any tips but very specific tips. Again, the reader wonders what these particular tips are.

Here are some examples (as you read them, try them without the word "the" and you'll see the difference):

Further Reading: The Curiosity Gap: How to Entice People to Click Your Emails and Read Your Content

#4. Titles That Solve a Problem

When people find your pages in the Google search results, it means they have a problem they’re trying to solve.

Use the word ‘How’ in your title and you immediately signal to the reader that you’re about to solve a problem:

Avoidance of pain is an even stronger motivator than the pursuit of pleasure. If your title suggests your reader could avoid loss, cost, or pain, you’ll likely get more clicks:

We’re all looking for something that will change our lives. And it doesn’t have to something huge:

One of our greatest motivators is the fear of failure, so if you want to write catchy titles for articles, you should consider invoking fear of failure.

Unfortunately, it motivates people more than the desire for success:

You would think we are more attuned to positives than negatives.

But the reverse is true: our survival instinct picks up on negatives much quicker than positives. That's why the newspapers are full of bad news - bad news sells.

#9. Use The Unusual Insight

Bold statements stop people in their tracks and grab their attention. 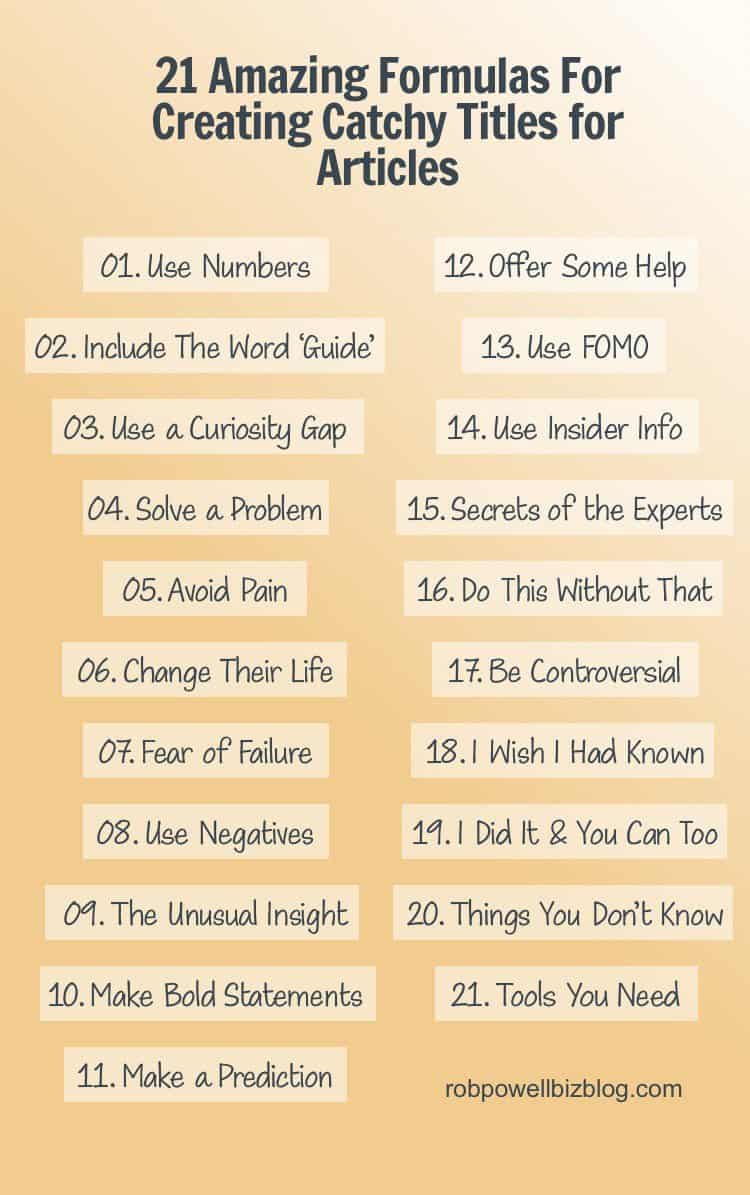 We’re all worried about the future. Even if what we’re doing now is working, will it still work in 5 years’ time?

We all want to be helped and nurtured. Use the word ‘Help’ in your title.

This is a huge trigger for human behaviour. Fear of missing out is so basic to human nature that it has its own acronym. FOMO (Fear of Missing Out) is simply the fear that others are getting something you’re not.

We all want to get ‘inside’ information that is not available to the masses. That's why these kind of titles get masses of clicks:

Most people believe that the experts never share their best secrets, so this is another kind of title that will trigger a response:

#16. How To Do This Without Doing That

It's a fact of life that most of the things we want involve doing something we don't want, hence the saying: "no pain, no gain". And that's why this kind of title has such a strong appeal - it promises the result without the pain. This title formula  takes the form of: How To Do This (Positive Thing) Without Doing That (Negative Thing).

This technique has the added benefit that it allows you to include a secondary keyword in your title:

The Internet is swamped with free content that basically regurgitates advice that's already available in hundreds of different blog posts. And that's why controversial or contradictory titles get clicks. You're telling the reader: "this is something different". Here are some examples:

We all know that learning from other’s mistakes can save us months, if not years, of frustration. So this is another type of title that people click on:

One of the fears that people have on the Internet, especially when they are starting out, is that the people giving advice are successful because they have some advantage that the reader doesn't have. So if you can assure people in the title that they can get the same result you did, that's going to get clicks.

When you begin your title with the word 'why', it tells the reader you're about to give them a reason. And reasons have a powerful effect on human beings.

In 1977, American professor of psychology, Ellen Langer, conducted an experiment where she got students to jump the queue for a photocopy machine. The students gave three different reasons for jumping the queue:

It was version #3 (which is not actually a reason) that was the most successful in getting people to agree to the queue-jumping.

The takeaway? Reasons are so powerful in human psychology that even a meaningless reason will work.

You can read more about this experiment in James Clear's article: The One Word That Drives Senseless and Irrational Habits

The title of your article has a huge impact on whether people click on your snippet in the search results. Yet for many bloggers the title of their blog post is an afterthought.

Titles make or break your articles. And that's why it's worth spending some time writing a compelling title.

Try using just some of these title formulas on your next blog post and watch as it rises up the search results.

And if you've got a moment, go back to your old blog posts and see if you can use these formulas to come up with better titles for them as well.