The Google Freshness algorithm was announced in November 2011. The idea behind this algorithm is to show the freshest content at the top of the search results.

The algorithm recognizes that not all content needs to be fresh. For example, an article about the sacking of Rome by the Goths in 410 A. D. doesn't require freshness - content published ten years ago will be just as accurate as content published a week ago.

But the query: "who is the mayor of New York?" requires freshness. The search engine needs to find current answer to that question. This is an example of QDF or 'query deserves freshness'.

The reason for introducing the Google Freshness Algorithm is that a lot of the information on the Internet starts losing its value after a certain amount of time.

But what about evergreen content? Does that have to be fresh? Some content seems to be immune from the freshness test.

For example, I have an article about blogging that has occupied Position #1 in the search results for over a year.

Should I update that article?

In fact, here’s a valuable tip: if you have any blog posts in Positions #1, #2, or #3 don’t touch them! Any change you make will awaken the giant and make it re-evaluate the ranking of that page.

While evergreen content doesn’t need to be updated on a regular basis, websites that add new content more frequently seem to perform better in the search results.

3. How To Optimize For The Google Freshness Algorithm

So what do you need to do to stay on the good side of the Google Freshness Algorithm?

In a previous article I talked about how to nudge Page #2 articles on to Page #1 of the search results. I pointed out that improving Page #2 blog posts offers a much higher return on investment (of time) than creating new content.

The same applies to any blog post that ranks on Page #1.

In fact, once you’ve reached a certain critical mass of published articles, your best return on investment would be to update and improve existing blog posts.

4. What Makes an Updated Blog Post Do Better in the Search Results?

It’s important to point out here that there are two mechanisms operating when you update the time stamp on a blog post:

1. Search engine – the algorithm detects that your content has been updated

2. Human behavior – when searchers scan the snippets on a search results page, they naturally tend to click on the ones that have the most recent date.

In WordPress you can change the date of publication by clicking on ‘Quick Edit’ beneath the blog post title:

A Word of Caution: Some webmasters change the date of publication without updating the content of the web page. As the case studies below demonstrate, you can get a rankings boost simply by changing the date of publication to the current date. However, I would be very cautious about doing this: it could be seen by Google as an attempt to ‘game’ the system. My advice: if you update the date, make sure you add at least 10% of new content to the article.

5. How To Display a ‘Last Modified’ Date

Once activated, use these settings: 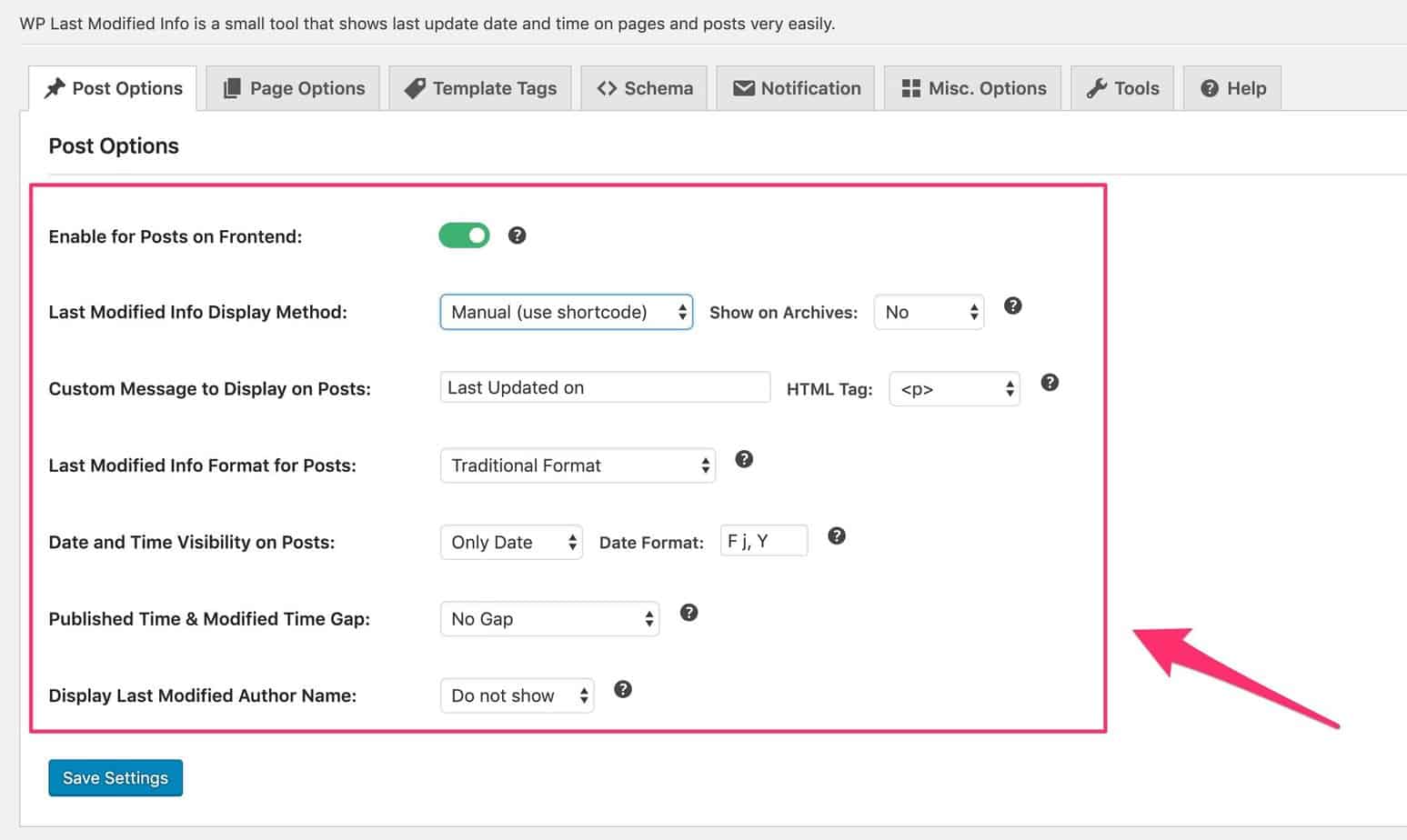 Then go to the Schema tab and choose the ‘Default Mode’. This will ensure that your ‘last modified’ info will be shown to the search engines:

Then, when you update a blog post, simply insert this shortcode at the beginning of the article:

The plugin will now add a ‘Last Updated’ date to your blog post or article:

Most business articles would hardly fit the profile I outlined above for ‘query demands freshness’.

And so you might think that business-related content would not be sensitive to the Google Freshness Algorithm.

But the following two case studies show quite the opposite.

In the first case study (published on Moz), Anthony Nelson of NorthsideSEO conducted a test to measure the effect of changing publication date without making any change to the content of the articles.

The test was conducted in April 2015

Nelson conducted the test on 16 blog posts that had all been online for at least one year.

Key characteristics of these blog posts were:

This was the traffic that each blog post received in the four weeks before re-publication: 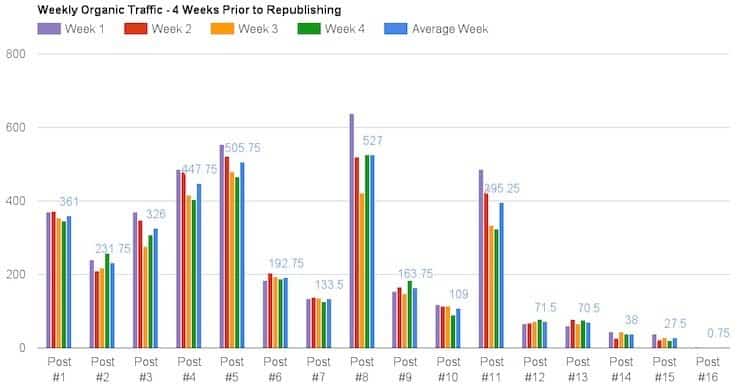 And this was the traffic each post received in the four weeks following re-publication: 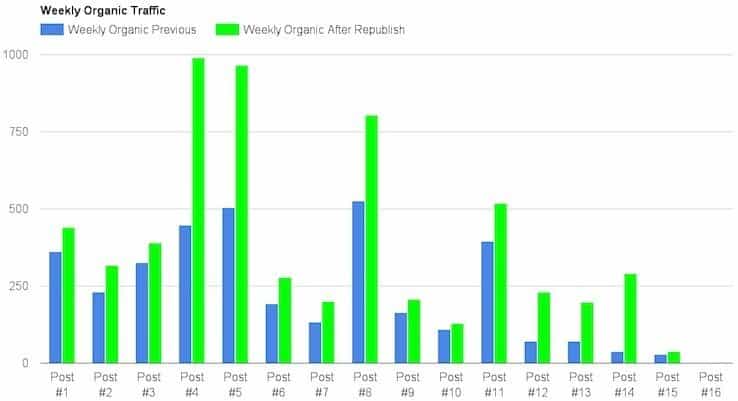 As a group, these 16 blog posts received a 66% increase in traffic as a result of having their publication date changed.

Two factors likely played a role in the traffic boost:

My first thought when I saw these results was “how did the Google freshness algorithm fail to pick up that this was old content with a new date?”

But when you look more closely at the two factors causing the increase in traffic, both were beyond the control of the Google algorithm.

The takeaway from this test: apparently you can ‘fake’ freshness and get a traffic boost (or at least you could in 2015).

On a sample of re-published blog posts his organic traffic increased by over 50% solely because the date of publication at the top of the blog post had been updated.

This is what his traffic looked like on one of these posts before and after the experiment:

Gael Breton puts it down to ‘the freshness algorithm’ kicking in. In my opinion, it’s more like to be the two factors I noted above:

Whatever the case, it’s another demonstration that changing the date alone can give your content a massive boost in traffic.

What’s interesting about Gael Breton’s test is that it was conducted in early 2019.

In other words, the technique that Anthony Nelson used in 2015 still works today.

With the introduction of the Google Freshness Algorithm, Google has a bias towards fresh content. But this applies to certain categories of content more than to others.

But as these two experiments demonstrate, even evergreen content can get a big lift in traffic from a simple update.

In these two case studies, all that was changed was the time stamp on the blog post. In both studies, the sample posts received a more than 50% growth in traffic in the weeks following the update.

However, while this may be a quick and easy way to increase your traffic, I would caution against changing publication dates without also adding new content to your articles.

What is Google's latest algorithm?

Google announced on February 10th, 2021 that Passage Ranking was live for English-language queries in the United States. Passage Ranking is a new technology used by Google's Algorithm that can rank individual passages within the search results (SERP) based on the search query of the users. Prior to Passage Ranking only individual pages could be ranked. The searcher then had to find the passage that was relevant to their query.

How many times a day is Google changing their algorithm?

What is Google algorithm for SEO?